Dick Turpin: The Myth of the English Highwayman 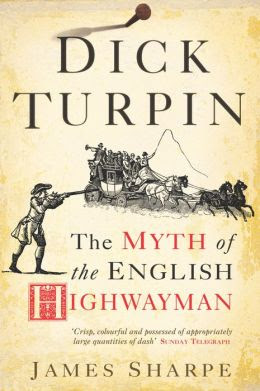 
At least he died well, in what the eighteenth century considered the appropriate manner for its condemned criminals. Determined to look his best when he met his end, he had, a few days previously, bought himself a new frock coat and a pair of pumps. He had also, as a further preparation, on the day before his execution appointed five men as his mourners, and given them three pounds and ten shillings to be shared among them for following the cart that would carry him to the gallows and for overseeing his subsequent interment. He distributed hatbands and gloves to several other people, and left a gold ring and two pairs of shoes and clogs to a married woman with whom he had consorted, despite reports that he had a wife and child living in the south, while he lived under an assumed identity at the Humberside township of Brough.

But at the same time it examines culture and popularity: in other words what sells and what entertains. Why was there an INCREDIBLE market for books about criminals--specifically highwaymen? What was it that readers found so exciting? What was it that others feared about this popular form of entertainment? What connections did people make then between reading about crime and committing crime. While a third of this nonfiction book examines the facts of 'the real' Dick Turpin, I would say that probably two-thirds of this one focuses on HOW the legend of "Dick Turpin" came to be; how this one person came to personify the ultimate highwayman. This speaks of the culture. The legend of Dick Turpin was crafted--well-crafted--intentionally crafted. And the legend became something above and beyond what anyone could have predicted.

Since I read Rookwood by William Harrison Ainsworth last fall, I found that chapter to be very interesting indeed! Ainsworth's novel is discussed in depth--its strengths and weaknesses. Also Sharpe examines--perhaps more briefly--the other writers who followed. He discusses penny dreadfuls, plays (good and bad), folk traditions, collectibles (did you know there were porcelain figures, toys, and games?!), comic strips, movies, parodies, TV shows and miniseries. And pubs. He definitely mentions all the "Dick Turpin drank here" pubs.

It concludes by focusing on the shaping and reshaping of history, and what happens when pop culture becomes involved--perhaps too involved--playing historian.

I sought out this book, I admit, because the Horrible Histories' Dick Turpin song is just too much fun. The song both tells the truth--some facts about the real Dick Turpin--and celebrates the legend. It does this through the costumes and acting. He may be saying he was no romantic hero, but, he looks every bit the romantic hero. I was mostly curious to see if the last part was true. Was he REALLY "stitched up by a postie"?! Did a postman really recognize John Palmer's handwriting as being none other than Dick Turpin's handwriting? This book answered that question and so many more!!!


Dick Turpin is one of that select band of figures from England’s past (others might include Henry VIII, Queen Victoria, Sir Winston Churchill and, interestingly, Robin Hood) who are instantly recognisable to everyone.

Turpin is a figure who is instantly recognisable to the bulk of the population, and around whom a potent mythology has gathered. None of this would have been apparent to those who apprehended, guarded, executed, or gave evidence against him in 1739. Yes, he was a notorious criminal: but one or two of those emerged every year in the eighteenth century, to enjoy a brief fame before they, too, ended their career on the gallows... But it is Turpin we remember, Turpin who has passed into the popular consciousness, not the dozens of others. So with Dick Turpin we encounter two other issues. The first is the nature of legend, of how it gets created and perpetuated, an issue that also leads us into contemplating the nature of fame. The second is the relationship between history and legend, and, by extension, of how the two operate in our modern culture, and how we draw on both of them to imagine our past.

Overall, it is clear that most highwaymen, particularly those based in the London area, were firmly locked into the unglamorous world of pickpocketing, street robbery, burglary, prostitution, and the fencing of stolen goods, all of these facets of the well-developed criminal underworld in the capital. Thus the modern observer is left wondering how, why and when the highwayman was selected as the romantic figure of later, and to some extent seventeenth- and eighteenth-century, legend.