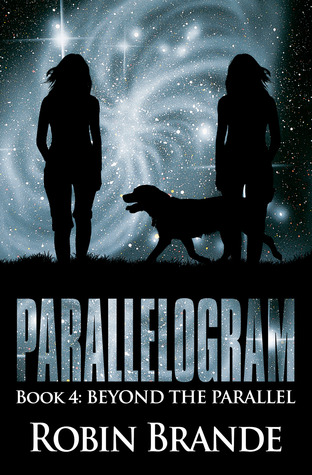 I LOVED, LOVED, LOVED Beyond the Parallel. I am slightly surprised by how MUCH I loved it. I'll start with the bad news. That's fair, right?! Beyond the Parallel is the fourth book in a series. The 'bad news' is that you 'have' to have read the first three books in the series in order to get this one. But is that really bad news?! You could easily see it as good news, right, ESPECIALLY since all the books in the series are available now. (And they are reasonably priced for the kindle as of right now). There are some benefits to waiting until the last book in a series is released before starting a series. The cliffhanger endings can't frustrate you if you've got the next book ready to go!

So. If you've read the first three books, I probably, don't need to convince you to pick up the last book. But in case you need a little extra convincing, I'll do my best. I will say that I found Beyond the Parallel to be satisfying and compelling to say the least. And that's keeping the gush out--so far.

So. What is Beyond the Parallel about? Audie, our heroine, is trapped--and not for the first time--in Halli Markham's body. She's been given a second chance of sorts. A chance to redo the last few days leading up to what *might* have been her death. There are a few things that Audie knows for certain, and oh-so-many things that she is uncertain of. On the one hand, Audie is trying to choose differently and avoid what she sees as mistakes from the time before. On the other hand, she's trying to be true to herself and follow her instincts. She doesn't want to over-think things and sit around doing nothing after all.

So Audie finds herself in Halli's body in London reunited with two of her closest friends: Daniel and Sarah. She'll be staying with that family. She's got a fuzzy plan: to find an Oxford professor who may be the only one to help her 'escape' this alternate reality and return to her own life/body. But she doesn't know his name or what school he's associated with. Fortunately, Daniel and Sarah (and their parents) are good at brainstorming. But even if all goes smoothly...there are other challenges to being in Halli's body. Namely Halli's horrible parents and their expectations and threats.

Much of the novel focuses on Daniel and Audie (in Halli's body) working with Dr. Venn. I happened to LOVE Dr. Venn. Those chapters, those conversations, well, I just LOVED the direction the story was going. It was just super-compelling and thought-provoking.

This is probably my favorite of the series perhaps because finally all things are resolved and many questions answered. I don't know that I had expectations on exactly how I wanted it to end, but, I was quite satisfied with everything!

I would definitely recommend all four books of course!

[ Smiles ] I have to admit that you are always introducing your readers to good reading material, Becky.

Honestly, I am not familiar with the author Robin Brande.

Thank you for another lovely book review!