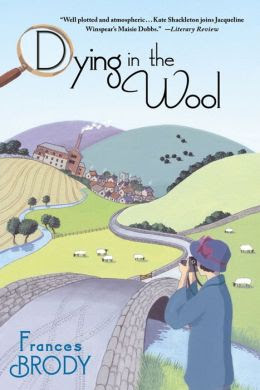 Did I love Dying in the Wool? No, not really. I had hoped to love it since it's a cozy mystery set in England in the 1920s. But I merely liked it instead of LOVING it.

The novel introduces the private detective, Kate Shackleton. She's a widow; her husband was a soldier who died during the war. Since the war, she's helped--usually without a fee--people find out what happened to their missing loved ones. Her other hobby is photography.

In Dying in the Wool, Kate Shackleton has her first paying case to solve. Her friend--her acquaintance--Tabitha is getting married in a month or two. Her father, a mill owner, disappeared in 1916. Some people strongly feel he's dead--likely suicide. Other people feel strongly that he's just ran off, probably with a woman to start a new life. Tabitha wants answers. Are the people in the village of Bridgestead keeping secrets? And can Kate and her ex-policeman partner (Jim Sykes) get people to talking? Will this case be easy or difficult? Is it dangerous to ask the wrong questions even after all these years?

I liked the setting just fine. I did. I liked Kate Shackleton and her partner, though I wish we'd had more of him. Would I have liked this one more if I'd found more of the characters likable? Perhaps. Probably. I really just felt this one had so many despicable characters in it. I hardly liked anyone! And it is NOT a clean read. I was hoping it would be a bit cleaner. That probably kept me from loving this one too. 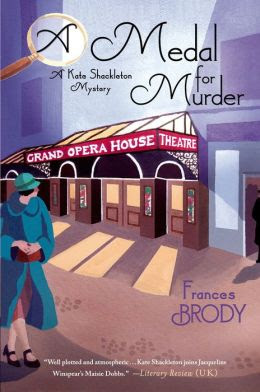 Did I love Medal for Murder? I think maybe I did. At the very least I liked it so much more than the first book in the series. (I think I might have not been in the right and proper mood to enjoy/appreciate Dying in the Wool.)

Kate Shackleton and Jim Sykes have been asked by a pawn shop owner to investigate a robbery, and to discreetly visit the owners of the stolen (pawned) items. Sykes visits some. Kate visits some.

I may have liked this one more because of its theatrical themes. The missing girl--woman, I should say--is an actress. She disappeared after the last performance of the play at the local theatre. Her disappearance wasn't the only strange and unhappy event that night....

I really did enjoy this one very much. It was a quick read! I really started to like the characters, especially Kate and Jim and Inspector Charles. 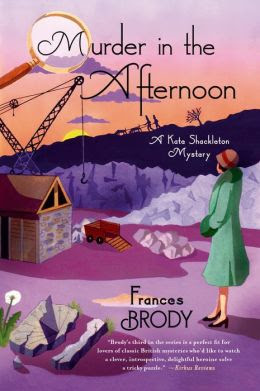 I am definitely enjoying this mystery series. I may have started the series hesitant, but, by the third book, it is love. I've enjoyed each book in the series a little bit more.

Mary Jane Armstrong comes to Kate Shackleton early one morning begging her to help find her missing husband. Her daughter, Harriet, had found him dead on Saturday evening. However, by the time she'd returned with an adult--the body was gone. NO ONE in their town/village had believed her. "She's just a girl after all...and everyone knows that girls make up stories for fun." That's the logic that Kate Shackleton is up against. Kate does believe Harriet's story. And though she has the mother's support--seemingly strong support--in the case, she's having a hard time of it since no one in the community wants to talk to her about the supposed crime.

But as readers can imagine, things are not as they appear. Danger remains so long as the murderer remains free.

This one is a nice addition to the series. Readers learn more about Kate's background. And Inspector Charles is definitely coming to be a love interest!

That's interesting that you liked the 2nd better than the 1st -- it's usually the other way around for me. Although, the theatrical theme would pull me in, too. Glad that it's really coming together for you by the third. I like discovering a new series to love!

Thanks for participating in British Isles Friday!

I was surprised that you kept going after the first really, I'm not sure that I would have, but glad you did. I really like the covers, they're charming.

Louise, sometimes I impulsively check out multiple books in a series at a time which makes it easy to keep on going in the series even if it's not instant love.

I felt the exact same way about book 1 - I wanted to love it but just couldn't get into it. Thanks for continuing because based on your recommendation I will try the second book and hope to like it as much as you do!