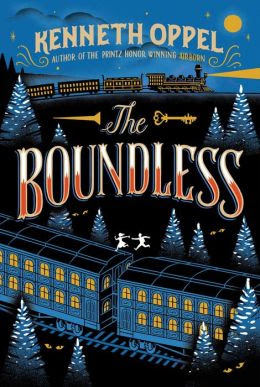 Three hours before the avalanche hits, William Everett is sitting on an upturned crate, waiting for his father. The town doesn't even have a name yet.

If you love historical action-adventures with danger and mysteries and secrets and murders, then The Boundless might be a very good fit for you, especially if you love children's books, or circuses, or trains.

The first chapter serves as a prologue. It introduces the hero, of course, Will Everett, and many of the other characters as well. Readers learn that Will loves to draw. Will meets a mystery-girl that mesmerizes him, that will continue to mesmerize him for over three years. Will meets Cornelius Van Horne, the manager of the Canadian Pacific Railroad. Will gets invited to go along on a train ride. His father, James Everett, works for the railroad, they'll meet him at the end of the line. He'll meet several people on his journey. He'll hear things, see things. For example, he'll see the plans for the Boundless, and hear of this man's visionary idea for train travel. Things happen that will change his life forever.

The rest of the novel is set three years later and covers a short span--perhaps a week. In that week, much will happen. Will, the hero, will face DANGER and have to prove himself again and again and again. Will is many things, talented, for example, but courageous not so much. He is forced to risk much, to face many different kinds of threats and dangers. He also spends much of his time thinking and pondering.

Will has one idea of his future: what he wants, what he needs. His father has another idea. The two are opposites essentially. Part of him wants to completely reject his father's plans for him. Another part is scared. So when he's not actually at risk of dying, Will ponders the future.

I liked this one. I didn't love it. But I think for those that like action-adventure, this one could prove appealing.

It sounds pretty intricate. I am not a fan of action-adventure. I tend to skip pages until they reach the top of the mountain or the police catch the guy in the car chase. I just want to know the physical outcome, not how they got there. Very rude of me when these authors put so much into making those scenes exciting.