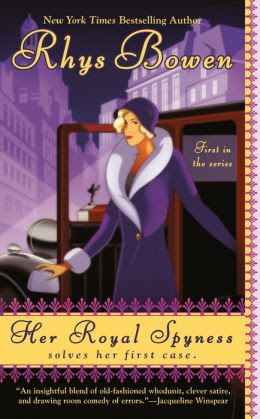 I wanted a quick, light read: light on history, light on mystery. I was satisfied enough with Her Royal Spyness by Rhys Bowen. Why "satisfied enough"? Well, the book moved quickly for me. I was interested in the time period it was set. (England, spring of 1932) I was also curious about the "royal" aspect of it. (The heroine is 34th in line to the throne.)

The premise of this one is simple. Lady Georgiana (Georgie) may be royal, but, she's also young and poor. Being royal makes her eligible for making a good marriage, perhaps, most likely an arranged marriage. But it keeps her from getting a regular job and earning her own way. To escape a social event designed to match her to someone she doesn't want to marry, she lies to her family and arranges to go to London. Her brother is allowing her to stay at his place--the family's residence--but he's not allowing her to take any servants or providing any money to hire her own once there. She'll be completely on her own for however many weeks she chooses to escape. She'll get reacquainted with some people, meet several new people, etc. She'll also socialize with the queen on occasion. (The queen wants her feedback on the married American woman, David is infatuated with.) One of the people she meets is a potential fling. His name is Darcy. The two could have some light fun together. But. She's uncertain about him and if she even wants to have a fling.

So. The mystery. A body is found in the bathtub. A dead body, of course. (I kept thinking of Whose Body? by Dorothy Sayers). She discovers the body, and since it's in her brother's house, well, she fears that everyone will conclude that her brother "Binky" did the crime...

I found it entertaining enough. I didn't find it to be the perfect read, however. In terms of characterization and dialogue and description. It kept me reading at the time, but, I'm not sure it's one that will stick with me.

Still, I think I will read one or two more in the series to see if it improves.

ETA: I have read about three or four chapters in the second book. Enough to know that I don't think it will suit me after all. It's just not a good match for me.