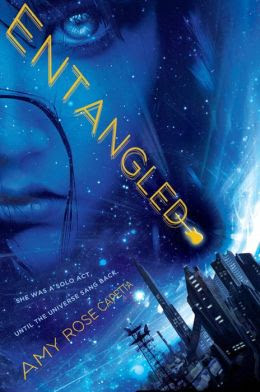 On the one hand, I didn't end up connecting with the characters, and, I found much of the book to be confusing and/or too bizarre for my liking. But on the other hand, I found it compelling enough that I wanted to read it through until the end so that I could see if Cade 'finds' her 'entangled' missing half, Xan.

Entangled is YA Science Fiction. It's set several thousand years in the future long after Earth itself has been destroyed--by asteroid, I believe. Humans haven't done a good job colonizing space. In fact, they've done an AWFUL job of it. They're not thriving, and, at best are merely surviving. Humans are the lowest of the lowest of the low. All alien races seem to despise humans as nobodies.

Cade is the book's human narrator. She's a teen musician trying to make sense of her noisy existence. Music is the sole way she copes with her life. Her music seems to help those around her cope better with their own lives too. Even the spacesick humans who have lost their sanity completely. (The spacesick seem to have a need to touch and be touched, to connect with anything and everything outside themselves.)

Soon after the novel opens, Cade is visited by someone--or a remnant of someone. She learns that she is special, that she is 'entangled,' that she has a second-half, Xan, who is in danger, that Xan and Cade together could be the saviors of the human race. It's a lot of information to absorb. But. She takes her visitor seriously and begins a task that seems--at least to her--impossible. Finding a way off the planet and onto a space ship, traveling to the planet, Hades, where Xan is being held prisoner.

It would be a very short and unsatisfying book if Cade didn't find a way off the planet at least. And, as you might have guessed, Cade does in fact make friends with the people she's traveling with. She informs them of her mission, and, they decide to help her. Not that they offer help immediately and without reservation. But. Eventually relationships--friendships--are formed. And Cade begins to feel a little less alone and a little less overwhelmed.

There are a handful of world-building scenes throughout the novel. I'm not sure why they didn't quite work for me. I just failed to engage with this book and the characters within it. I wanted to know what happened. But I didn't necessarily "like" or "enjoy" the characters or the journey. Some characters I liked more than others.

This one may work for you. It didn't quite work for me. But as I said, I at least cared enough to finish it.
© 2015 Becky Laney of Becky's Book Reviews
Posted by Becky at 9:20 AM

Hi,
The reveiw was engaging. The title and matter look promising, and will certainly add to my collection.Just let me know if it is available on Amazon. You can also see this https://bookshopsandbeyond.wordpress.com/ for informatioon on book shops.