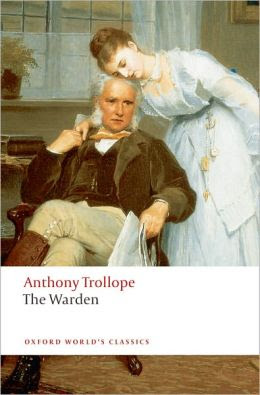 I make no secret of the fact that I LOVE, LOVE, LOVE Anthony Trollope. The Warden is the first in his Barchester series. And, I believe, it was the first Trollope novel I read. I first read and reviewed it in the spring of 2009.

Reasons you should read The Warden
What is it about?!

It's about one man, Mr. Harding, and his family: two daughters, one married, the other quite single. It's also about Harding's neighborhood and circle of friends. It's about the necessity of having a good reputation and a clean conscience.

Eleanor is the apple of her daddy's eye. Susan is married to an Archdeacon (Grantley). Because of his eldest daughters good fortune in marriage, Mr. Harding, has been named warden of Hiram's Hospital (alms house). The 'enemy' of Mr. Harding (and the suitor of Eleanor) is a young man named John Bold. When we are first introduced to these characters, we are learning that Bold is encouraging a law suit against Mr. Harding. He feels that Mr. Harding is in violation of the will. (Way, way, way back when (several centuries past), a man left his (quite wealthy) estate to the church. The church followed the will for the most part, but as times changed, they changed the way they carried it out. They were following it through in spirit in a way: still seeking to take care of twelve poor men (bedesman) but over time the salary of the warden increased.) Bold has stirred up the twelve bedesmen into signing a petition demanding justice, demanding more money, demanding 'fairer' distribution of funds.

The book presents this case through multiple perspectives: through two Grantleys (father and son), a few lawyers, Mr. Harding and Mr. Bold, of course, and through a handful of the twelve men involved that would profit from the change. There is one man whose voice seems louder than all the rest. And that voice comes from the newspaper, the Jupiter, one journalist writes harsh, condemning words directed at Mr. Harding--he assumes much having never met Harding personally. These words weigh heavy on the heart and soul of Mr. Harding. (And they don't sit easy on Mr. Bold either.)

I loved this book when I read it last year. There's so much to think about it and Mr. Harding is great!

Trollope is one I keep meaning to try. I've watched The Paradise on PBS and I think I would enjoy it.

I am reading The Warden right now based on your earlier recommendation. It's very enjoyable so far.

Yes, Mr. Harding is one of the dearest men in all of literature.