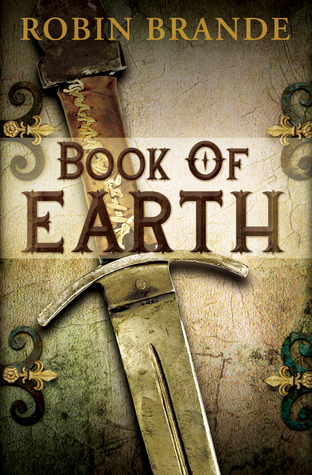 Bradamante knelt in the mud and cut away all of her hair. Rain peppered her bare scalp. The wind shoved at her in gusts, plastering her wet clothes against her skin. It was stupid, she knew, to kneel here in the storm--even in summer the combination of wet and wind could prove deadly. Her fingers were already wooden from the cold. But she continued working, pulling each new section of hair taut and slicing it away with her hunting knife.

Did I LOVE, LOVE, LOVE Robin Brande's Book of Earth? No. I didn't LOVE it. Did I love it enough that I'd want to read more in the series? Yes. In fact, I probably would enjoy them more.

The main focus of Book of Earth is on world-building and introducing the characters. Both are important, essential even. But it had a prologue feel to it, like the real story had yet to begin. That's not to say that the book lacks action or suspense. But most of it comes towards the end.

Bradamante is the heroine of Book of Earth. Is she weak? Is she strong? Is she decisive? Is she impulsive? At the start of the novel, Bradamante has perhaps taken the first step towards her future. Her decision to cut her hair may seem small, but, it's life-changing. That night she has her first vision. (This first vision reminded me of Samuel's calling in the Bible. For those that are interested, you can read about it in 1 Samuel 3.) In the vision, she sees a teacher, Manat, and an older-stronger-wiser self. I believe at the time of the vision, she is twelve, but her older self, her "warrior" self is in her twenties. She listens to what Manat has to say. She's at a crossroads of sorts. She can choose what direction her life will take. She can choose to commit to the warrior-path knowing that it will be difficult and demanding and require tough sacrifices, or, she can remain where she is and take a more passive  role. (I hesitate to use the word "victim" here, but, in some ways it might apply. Since most readers can guess this will not be her choice, I'm not sure if it matters.) Bradamante chooses to become a warrior: to begin her training. But this training is unique. For it occurs NIGHTLY in her visions. She's training for the future while she sleeps. She wakes and plays instructor for her brother, Rinaldo. I'll be honest: these visions add strangeness to the novel. I wasn't sure, at the beginning, who Manat was, if she was a real person, or a spirit. Her brother also had some doubts about "Manat." Is his sister crazy? Why is she suddenly having all these strange dreams or "visions"? How does she know what she knows? Bradamante's biggest fear--at first--is that her new life will take her away from her brother. She is hoping that it WILL take her far, far away from her mother, however. But in her reckoning, the perfect life would take both of them far, far away, and they'd be together and both strong warriors.

Things don't go as Bradamante would wish. To say the least! And there's a dark, cruelty to the world Brande has created in Book of Earth. There were definitely scenes that brought the Bible to mind once again. (Genesis 19 and Judges 19). I'm struggling with how much to reveal--in general. How much is too much in a review? I will add this perhaps. There comes a time when Bradamante's training moves from nightly visions to reality. In other words, she begins to physically train and do battle with other would-be warriors. She continues to learn from Manat, Samual, and others. Not just how to do battle or how to survive, but, more meaning-of-life, philosophical, spiritual stuff.

The world Brande has created definitely has a spiritual side to it. But it isn't exactly a spirituality that one would recognize or distinguish as being "Christian". There isn't one God. In fact, lower-case "g" throughout. And all the talk is of each person finding and listening to their god. There isn't any one message to be spread or taught either. In fact, in quite a few places, it's stressed that what happens between a person and their god is private and personal and just for them. That being said, Bradamante's message from her god comes almost straight from the Bible--Jeremiah 1:5. Before I formed you in the womb I knew you. Before you were born I set you apart. That is the message Bradamante's god gives her along with: Do not be afraid. I have called you to this life. Do not be afraid. Be strong in body. Strong in mind. Strong in heart. And know that I am with you.

Book of Earth kept me reading. Even if I didn't always "like" a particular scene. (Intense scenes can make me uncomfortable in the moment. I want to know what happens, if characters get out of a situation. But until they do--I have an almost hate-to-look reaction.) For the most part, I cared about the characters and thought they were well-developed. (Jara and Astolpho are other characters I came to care about.) The world she created was interesting. Not one I'd like to visit, mind you, but interesting all the same. I do want to know what happens next.