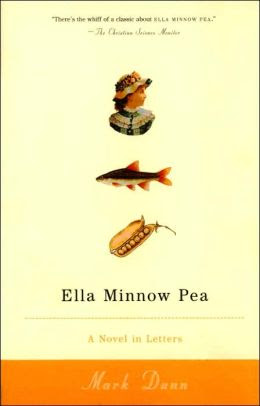 It has been years since I first read Ella Minnow Pea. For better or worse, my original review was more of a teaser, I didn't record what I *felt* about the book after reading it. The sad thing is, I was tempted to go that way this time as well. The premise is probably the most interesting thing about the book.

Ella Minnow Pea is set on a fictional island called Nollop located a dozen or so miles off the coast of South Carolina. The people of Nollop supposedly "worship" Nevin Nollop, author of this not-so-little sentence: The quick brown fox jumps over the lazy dog. When the letter tiles start falling off the statue/memorial, the High Council decide it's a sign from Nollop the Supreme Being. It's oh-so-obvious to them, though not particularly to the average citizen, that Nollop is telling them to STOP using the fallen letter. One by one the tiles fall--over six months or so. The penalties for speaking or writing one of the forbidden letters is severe: a matter of life or death if you persistently rebel. But you don't even have to be defiant or rebellious. A crime is a crime no matter if it's accidental or intentional.

How does this effect life? at school? at home? at work? Will this turn neighbor against neighbor? Or will it somehow bring it closer together?

Readers meet a handful of characters through letters. But characterization isn't one of the novel's strengths, in my opinion. All the characters tended to blend together.

The plot, well, it comes a bit later in the novel. A challenge is issued at some point by the council, if and only if, someone can write a new pangram--a sentence using all twenty-six letters, and for the purposes of this challenge limited to thirty-something letters, then the council will bring back all the forbidden letters and life will go on as it did before. The last third of the book is about trying and failing to write the pangram by the deadline.

The premise is the novel's strength. And depending on your mood, the novel may prove worth reading even if it's just for the premise alone. It is a unique idea, in my opinion. And epistolary novels aren't all that common.

What I didn't comment on in my initial review, so I have no idea if it bothered me then or not, is the WORSHIP aspect of this one. How the island has built a cult, of sorts, around Nollop, and talk as if he is actually a supreme being instead of another human. There are elements of this one that are just so over-the-top. I am not sure if it is innocent humor, or hit-you-over-the-head symbolism.

Did I love it? No. Probably not. Did I like it? Well, I read it twice. And it isn't like anyone forced me to pick it up again. It was a quick read and pleasant enough for the most part.

The idea behind this book was just fun. :)

I did love this book, mainly because of the language aspect of it. I think it must have been an incredibly tricky thing to pull off, but the author did an incredible job.