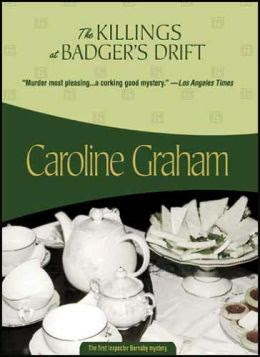 I'm so glad I checked out The Killings at Badger's Drift on a whim!!! It's always a good thing to browse in the library!

The first character readers meet is Miss Emily Simpson, a spinster who stumbles upon something she shouldn't see in the woods. That knowledge will lead to her death...readers however are not told exactly what she saw--or WHO she saw...leaving plenty of mystery and suspense for the rest of the book.

Readers next meet another spinster, Miss Lucy Bellringer, Miss Simpson's best, best friend. She is convinced that her friend was MURDERED. And she is seeking out Inspector Barnaby. The doctor may not be convinced that there was a crime, but, she is out to convince Barnaby and Troy to investigate and see for themselves. (They do take the case).

Plenty of characters are introduced and described throughout the book, throughout the investigation. Most, if not all, are potential suspects. Some seem more obvious than others. But. All are flawed in one way or another...making it just plausible enough that they could be guilty...

I definitely enjoyed this one. It was a quick read. I definitely HAD to know what happened. 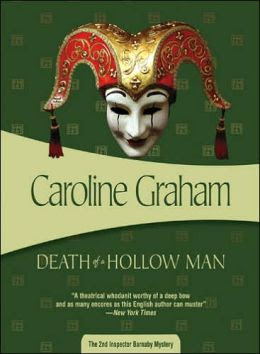 Death of a Hollow Man is the second book in the Inspector Barnaby series by Caroline Graham. I definitely liked it, even though I had some reservations. Why? Well, I know I'm in the minority, but, I prefer my fiction to be on the clean side. It's not necessarily the content so much as the description involved--if that makes sense. That being said, I liked this one. I never once seriously thought of putting it aside.

Death of a Hollow Man is set in a small-town theatre world. Most of the characters--suspects and victim--are actors for their local theatre. (Inspector Barnaby's wife is among the actors--though not the list of suspects.) Amadeus. That is what they'll be performing. Over half the book occurs BEFORE the crime, setting the stage for the oh-so-dramatic on-stage murder. Lest you think I'm spoiling things dreadfully, it's mentioned on the jacket copy. I won't be mentioning WHO the victim is OR who the top suspects are. That would definitely be spoilerish. After all, I like my mysteries to stay mysteries.

I liked the writing for the most part. There are SO many characters. Some I liked, some I didn't like at all.

My library only has one more book in this series. But I've decided to start watching Midsomer Murders for more Inspector Barnaby fun.

I had no idea Midsomer Murders is based on books! I love the show and used to watch it every day after school so definitely going to check out the books now.

I knew these stories sounded familiar! Foolish me, I watch Midsomer Murders on Netflix every couple of weeks. Of course I knew they were based on books, but I didn't put the two together when I first saw your review.