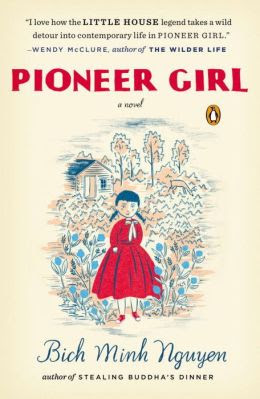 At first, I wanted to love Pioneer Girl. I then settled for wanting to like it. It has an interesting premise: A Vietnamese coming-of-age story with a Little House connection. Lee grew up reading the Little House books. She may not want to admit to liking or loving the TV show, but, the books she loves, has always loved. Her parents came from Vietnam to America in the 1970s. She was born and raised in the Midwest. Her parents, particularly her mother and her grandfather, were almost always in the restaurant business: managing bad buffets mostly. The older she got the more she wanted to distance herself.

So where is the connection to Laura Ingalls Wilder?! Well, her grandfather brought a gold pin with him to America. It was a pin that had belonged to an older woman, a white woman, a reporter doing a story on the war. Lee, as an adult, is convinced that woman was Rose Wilder Lane. Furthermore, she has a feeling that the pin is *the* pin described in These Happy Golden Years, a gift from Almanzo to Laura. The novel also introduces a "what-if" mystery.

The book drifts between her structured thoughts on Laura Ingalls Wilder, Rose Wilder Lane, and the Little House books AND her own meaningless (at least in the moment as she sees it) life. She's a twenty-something young woman, still sorta in school, but wanting to find something more in life: a good job would be nice, but validation maybe that she's made it. Lots of family drama. Bit of angst. These two focuses connect now and then. Lee travels and does research. Or should I just call it what it is: theft.

The BIG, BIG, BIG problem I have with the novel is Lee herself. Lee goes to a library with a special research collection: Lee steals a photograph from the collection. Lee goes to a museum: Lee not only breaks the rules and enters rooms she's not supposed to enter at all, but, she steals more stuff. A letter. A first edition book with scribbles/notes from Rose. Does she have a guilty conscience? No! In fact, she's proud and thinks herself the cleverest of all. I exaggerate perhaps. But the fact that she does think herself super-clever and is proud of what she's done and tells of her exploits says something about her character.

Pioneer Girl is a new adult novel. It's a thoughtful novel, reflective in places. Lee poses a good question now and then, seeking insight into deeper matters. But the book left me unsatisfied. I do LOVE the cover however.