My thoughts on Cyrano de Bergerac 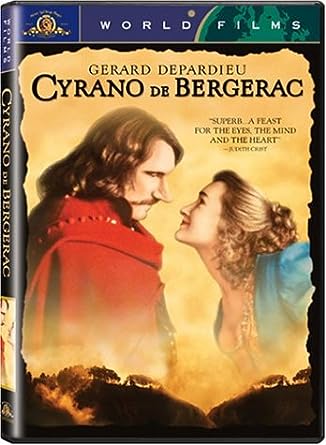 For Paris in July, I watched Cyrano de Bergerac in French with English subtitles. I cannot gush about it enough. It is all kinds of wonderful. And deserves to be watched and rewatched dozens of times at least.

The film was released in 1990. It stars Gerard Depardieu in the lead role of Cyrano de Bergerac. He is PERFECTLY perfect in this role. Anne Brochet stars as Roxane. Vincent Perez stars as Christian de Neuvillette.

Is it faithful to the play? Yes and no. I would say YES because it is true to the spirit of the play/book. Nothing has been changed about the characters themselves. The script-writing keeps to the integrity of the original. I would say NO because a few things were changed. For example, in the play, Roxane is able to ride through the enemy armies unopposed and unchallenged. If questioned, she just spills her heart and speaks of her desperate need to see her husband. She does arrive the day of the big, decisive battle. In the movie, Christian "saves" her from the enemy army and her arrival is far from unopposed. Christian is given something MANLY to do to prove himself.

I would also say that the movie misses an opportunity when it cuts one of the best, best lines from the play. What is that line? Roxane saying I've loved only one man, and I've lost him twice.

Cyrano de Bergerac is a serious, dramatic, ROMANTIC play with some very comic lines. But it isn't a comedy or at least not a ha-ha comedy as my friend would say. This production captures the tone of the play exceedingly well. I did try to watch another production, a filming of a stage production from recent years, and it was over-the-top too-much. Every line (of the first forty or so minutes) acted for a belly laugh. Which is, I suppose, okay for Cyrano de Bergerac's confrontation with the actor and all. But how can you connect with Cyrano and see his soul if you're just laughing AT him?


The soundtrack opens with a track called 'Cyrano'


I would definitely recommend this soundtrack. I think it's great music to have on in the background. It is great to read to, for example. It's just hauntingly beautiful.

I've often wondered about this movie (& book) - you've sold me!

Yes, you have convinced me also. I did not know it was a comedy as such. Will watch the movie, hopefully still during Paris in July!