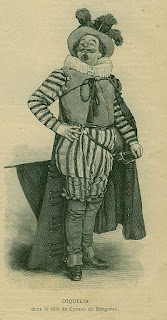 After watching the movie and reading the play, I was DELIGHTED to find a radio drama of what is fast becoming my favorite play!

Christian is played by Tom Hiddleston. I can easily imagine him as a perfect Christian! 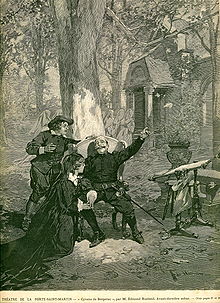 All the actors did a GREAT job bringing this drama to life. It's a great production. It's just a little over two hours long.

Premise/plot: Cyrano, our hero, is madly in love with his cousin, Roxane. Judging himself too ugly to stand a chance with her--or with any woman--he is content to love her from afar. Roxane contacts him, through a maid, letting him know that they must meet. For a few hours he dreams that maybe just maybe he has a small chance with her. But she is meeting him to tell him that she is desperately in love with a young cadet (soon to join his regiment) named Christian. Will he befriend Christian and help them to be together?!?! Christian is "in love" with Roxane too. They've never spoken to each other. They've only seen each other a time or two. And yet both know it's LOVE. Cyrano questions her. What if he turns out to be less than her ideal??? She'll DIE she responds.
Cyrano does as she asks...and more. He turns Christian into the man of her dreams...by giving him the words to speak to win her heart.

There is a third man in Roxane's life, Count De Guiche. He loves her, but, is married. He adds drama and conflict to this French romance....

I would definitely recommend giving this one a listen if you can.

What a great cast!How could it not be good :)

I imagine that the more familiar you become with the story, the more you enjoy it. what a great idea to listen to the BBC drama. On another note, my daughter told me today that Tom Hiddleston is dating Taylor Swift, and she was kind of miffed by that, imagining the two of them in very different talent circles.
On Mondays, I have a meme called Dreaming of France. Come play along if you get a chance. Here’s my Dreaming of France meme