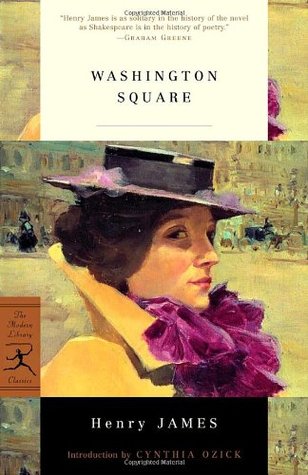 First sentence: During a portion of the first half of the present century, and more particularly during the latter part of it, there flourished and practised in the city of New York a physician who enjoyed perhaps an exceptional share of the consideration which, in the United States, has always been bestowed upon distinguished members of the medical profession.

A young man does come into her life--Morris Townsend--but who will prove right? Catherine who thinks it's true love. Mrs. Penniman who hopes that the two will marry so that she can continue to hang on his every word. Dr. Sloper who KNOWS (there is no mere thinking) that Mr. Townsend is a no-good idler after her money.

My thoughts: Henry James is JUST what I needed. I sped through this one in just two days. You've got to love a classic that just absorbs and excites you.

The characters. I hated Dr. Sloper. I wanted to YELL at Mrs. Penniman. I wanted to cheer for Catherine. As for Morris Townsend, well, it's best not to say anything about him at all. (I do wish we'd seen more of his sister, however.)

The story. I wasn't disappointed. Perhaps there was a time when the ending would have annoyed me. But not anymore.


“Try and make a clever woman of her, Lavinia; I should like her to be a clever woman.” Mrs. Penniman, at this, looked thoughtful a moment. “My dear Austin,” she then inquired, “do you think it is better to be clever than to be good?” “Good for what?” asked the Doctor. “You are good for nothing unless you are clever.”

“He is not what I call a gentleman. He has not the soul of one. He is extremely insinuating; but it’s a vulgar nature. I saw through it in a minute. He is altogether too familiar — I hate familiarity. He is a plausible coxcomb.” “Ah, well,” said Mrs. Almond; “if you make up your mind so easily, it’s a great advantage.” “I don’t make up my mind easily. What I tell you is the result of thirty years of observation; and in order to be able to form that judgement in a single evening, I have had to spend a lifetime in study.”

“it doesn’t take long to like a person — when once you begin.”

“But your daughter doesn’t marry a category,” Townsend urged, with his handsome smile. “She marries an individual — an individual whom she is so good as to say she loves.” “An individual who offers so little in return!” “Is it possible to offer more than the most tender affection and a lifelong devotion?” the young man demanded. “It depends how we take it. It is possible to offer a few other things besides; and not only is it possible, but it’s usual. A lifelong devotion is measured after the fact; and meanwhile it is customary in these cases to give a few material securities. What are yours? A very handsome face and figure, and a very good manner. They are excellent as far as they go, but they don’t go far enough.”

“The alphabet of common sense is something you will never learn,” the Doctor permitted himself to respond.

“Don’t undervalue irony, it is often of great use. It is not, however, always necessary, and I will show you how gracefully I can lay it aside. I should like to know whether you think Morris Townsend will hang on.” “I will answer you with your own weapons,” said Mrs. Penniman. “You had better wait and see!”

Thanks for the recommendation. It sounds intriguing, especially since you didn't give much away. I haven't read much Henry James, but love more obscure Victorian book titles, so will put this on my TBR list.
I only just noticed your Victorian Book Challenge for this year. I was thinking that now we're into April, it may be too late to give it a go, yet I've read several which will qualify already, so with a minimum of 4, could easily catch up.

Thanks for the great book recommendation- I haven't read many Victorian novels, but this one certainly seems interesting!

Paula, please join in the challenge!