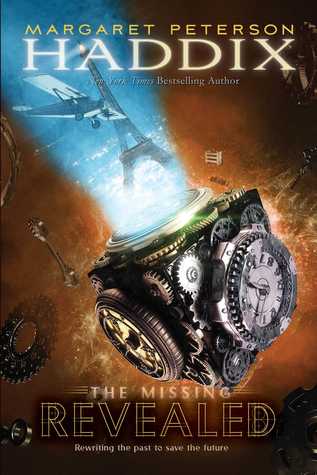 First sentence: Jonah saw the man before the man saw him.

Revealed is the seventh book in the Missing series by Margaret Peterson Haddix. The books usually feature a brother-sister team of Jonah and Katherine Skidmore. These two have been time-traveling essentially since book one with various other "missing" children from history. These children, more often than not, have all grown up in the same neighborhood/community. Chip, for example, is one of Jonah's best friends and Katherine's boyfriend. Usually each book focuses on one specific period of time, the children go there, solve or resolve a problem, and return to the twenty-first century. Revealed is NOT like that at all. For better or worse.

If I were to describe the reading experience it would go something like this: The author throwing a hundred balls into the air and telling readers: catch as many as you can, good luck.

Some of the story threads:

Who is Jonah? Is he Charles Lindbergh's son? Does he want to be? What if he is? What if he isn't? If he isn't, what happened to the real son?
Why does Charles Lindbergh kidnap Katherine? Which Charles Lindbergh kidnaps Katherine? Did he kidnap her because he's on their side? Or did he kidnap her because he's on their enemies side?
Why did practically all the characters--with the exception of Jonah and Charles Lindbergh--de-age? Why did all the adults in all the surrounding area become teenagers? Why is Katherine now a baby? Was it simply that it took going to this big of an extreme to get Jonah to think and act on his own?
Why do Gary and Hodge play such a large part in this novel? Why does Jonah believe anything they say? Are Gary and Hodge lazy or stupid or both lazy and stupid?
Shouldn't time travel have some logic to it? How did time split? Did time split? How did time un-split?
Why did Katherine's age get fixed but nobody elses?

The good news is that I think the novel is still action-packed, premise-focused. I think for those readers who can't get enough time travel this one can still work. I also think it is a bit amazing that I can jump right into the seventh book without having reread books one through six. I think, however, that might be a sign that character development is simple.

This book is different from the other six books. It essentially has readers going back and forth and back and forth between these time periods: the twenty-first century, the time hollow cave, 1932, and the plane-crash-landing of thirty-six (sometimes thirty-five) mysterious babies which happened thirteen years ago. There isn't a firm date on this "thirteen years ago" because I think Jonah has been thirteen since the series began in 2008. There is a bit of a difference between 1995 and 2002. Also the same scenes keep getting revisited. Hence why it is important for Jonah to notice what clothes Lindbergh happens to be wearing every time he sees him--"which" Lindbergh is this?!