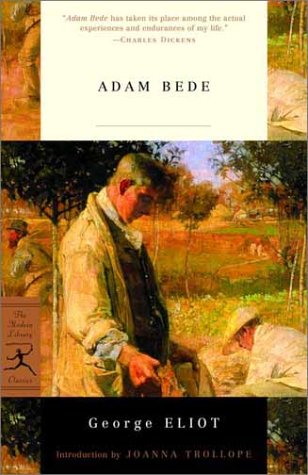 First sentence: With a single drop of ink for a mirror, the Egyptian sorcerer undertakes to reveal to any chance comer far-reaching visions of the past.

Adam Bede opens in the summer of 1799 in a rural community that is about to be scandalized.

Adam Bede loves Hetty Sorrel. Seth Bede loves Dinah Morris. Dinah and Hetty are cousins; both orphans, both staying with the same aunt and uncle. The two women couldn't be more different from one another. Hetty is young, beautiful, lives in the clouds instead of down on earth, believes in fairy tales and knights in shining armor. Dinah Morris isn't "old" by any stretch of the imagination, but her wisdom makes her more of an old soul than Hetty could ever be. She's a Methodist--a Methodist preacher. She's loving, compassionate, intelligent, wise, honest and sincere.

The squire's heir, Arthur Donnithorne, falls hard for Hetty. He's a soldier--home visiting just for a short time. He sees her, sees potential danger, rushes ahead anyway. He knows how it will end--just not when. It will end with him leaving her behind forever. Arthur could no more marry Hetty than he could fly to the moon and back. He knows also that Hetty will be crushed when he leaves. He'll also be upset. But he doesn't seem to grasp that he's aware of all the risks and she isn't. Not really. For one thing, she thinks she's as good as engaged. She knows that one day--hopefully soon--they'll be man and wife. All will be made right then.

Readers aren't horribly clear on if Hetty is aware of one HUGE danger. Does Hetty realize that she could get pregnant? Arthur seems aware of this danger; in his goodbye forever letter, he tells Hetty to write to him immediately if a PROBLEM should come up in the next month or so. Hetty doesn't seem to realize Arthur's veiled hints mean: if you should find yourself with child, let me know.

Before Arthur leaves, Dinah reaches out to Hetty. If you should ever find yourself in need of a friend, I'll be there for you no matter what. You are loved--unconditionally. Dinah herself leaves the community much earlier than that. She is being led by the Lord. She rejects Seth's proposal before she leaves.

Adam and Arthur are friends; their friendship is unequal perhaps. Arthur will be squire one day. He's several ranks above what Adam could ever hope to be. Adam is a working man, a hard-working man. He may or may not ever have enough money to marry and have his own place--apart from his brother and mother. But he loves Hetty. He is biding his time. Arthur is speeding up the situation by giving Adam opportunities and advantages in his carpentry business.

Arthur has a conscience, but it's weak. Adam has a conscience, and it's STRONG. Arthur knows right from wrong, but he follows his mind and not his conscience. He feels guilt, but doesn't repent. Part of repenting is turning away from sin, fighting temptation, and changing your behavior. Arthur's guilt doesn't lead him to repentance.

Adam and Arthur have a CONFRONTATION before he leaves. He has caught Arthur and Hetty kissing in the woods. Adam loses respect for Arthur, but not for Hetty. She was a victim; Arthur was taking advantage of her innocence. Arthur should have known better. Hetty wasn't capable of knowing better. As Adam reckons it.

Several weeks after Arthur leaves, Hetty and Adam begin to court. She agrees to marry him. The family is elated. The wedding is planned for around Easter time.

A month or so before the wedding, in February, I believe. Hetty decides to "visit" Dinah. Hetty is in actuality planning on running away--for good. Where is she running? To the last place she knew Arthur to be. Why? Because she's about to give birth to Arthur's child and no one knows.

Because her excuse was a good one, it takes almost three weeks before her family realizes she is missing. And it takes a good bit of time before Adam tracks down where Hetty went first. Before he puts all the pieces together, he is given a big shock. A woman matching Hetty's description has just been put in JAIL for MURDER. She has murdered her baby. He was found half-buried in the woods and discovered by a farmer.

SCANDAL. The "scandal" of the summer of 1799 might have been a "crazy" woman preacher preaching outside to the masses. The scandal of the spring/summer of 1800 was that one of their own was capable of MURDER (not to mention fornication). Who will be there for Hetty? Will every single man and woman turn their backs on her?

Enter Dinah. Only Dinah embraces Hetty and supports her one hundred percent. Unconditional love is in fact unconditional.

Where does Adam fit in? Well. He doesn't love Hetty anymore. He sees her as forever stained and beyond redemption. Because she is facing death, he digs deep and finds it possible to forgive her. Love, for Adam, was not unconditional but conditional. Now, for the record he blames Arthur almost exclusively. If it were up to Adam, both Hetty and Arthur would be on trial and facing death. Justice demands that Arthur be held accountable too. Of course, that is not how the world works.

The aftermath. Life eventually settles back into a routine of its own, but, some things can't be forgotten completely. Adam does find love again--in the arms of an amazing, wonderful woman: Dinah.

If I had to pick one character to LOVE from Adam Bede, it wouldn't be Adam Bede. It would be DINAH. For a more spiritual/philosophical review read my review at Operation Actually Read Bible.

Sounds like quite a heavy read, but maybe we'll worth it. I bought a copy at a second hand shop but have been putting off reading it, because the back cover blurb sounds fairly daunting. After reading your review I think I'll get to it some day. George Eliot after all 😊