The Cricket on the Hearth 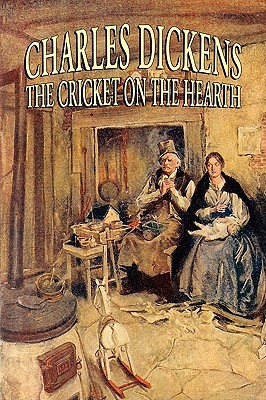 Premise/plot: This novella doesn't have chapters, it has chirps. Readers meet a happily married couple with a baby: Mr. and Mrs. Peerybingle. (His name is John. Her name is Dot). The couple's wedding anniversary is nearing, and an acquaintance of theirs is soon to be wed. But Tackleton, the groom-to-be is nothing like John. And the bride-to-be, May, is not in love. Tackleton knows this, and is rather proud. He feels Mr. Peerybingle is foolish for loving his wife as he does, and plants seeds of doubt in his mind. Does Dot really truly love him? Or is he blinded by his own love for her? Could his wife even be carrying on with another man behind his back?!

Mr. Peerybingle is not quite as bad as Othello in terms of jealousy. But is that because he's got a Cricket in the hearth watching over his home and preventing the worst of it?! Perhaps. His wife is keeping a secret from her husband, but, it's a good secret. One concerning a friend. She isn't the only one with a secret that's a burden.

Caleb Plummer has been lying to his blind daughter, Bertha, for YEARS. The biggest lie of all is that the man who employs them to make toys--Tackleton--is a kind, good, pleasant man. The problem is, he's mean, inconsiderate, and extremely UNpleasant. She's fallen in love with a lie--a man of her father's creation. Her heart is breaking that Tackleton is marrying.

With Dot's help, Caleb is going to tell her the truth. John will learn the truth as well; some details come from his wife, but others come from the Cricket and the household fairies.

Will May and Tackleton marry? Or does the day hold surprises of its own?

My thoughts: This was my first time to read The Cricket on the Hearth. It had its worrying moments. In the hand of Thomas Hardy, I don't think I could have gone on. John has to walk down a dark valley and be sorely tempted. This one could easily have gone the way of Othello. Fortunately, Dickens did not go that route! Perhaps because this one provides such a contrast of human emotion, the happy ending was all the more joyful.

I don't think I've read this one. I must get to it and Our Mutual Friend.