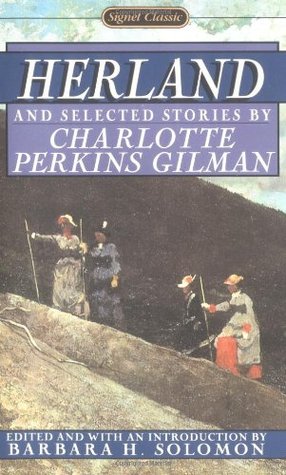 This week I read a handful of short stories by Charlotte Perkins Gilman.

First sentence: "It is the unexpected which happens," says the French proverb. I like the proverb, because it is true--and because it is French.

Premise/proverb: A young artist finds the unexpected happening in his love life.

My thoughts: I liked this one for the most part. The narrator is a snobbish young man who loves all things French. He also loves DRAMA. And this story has plenty of drama. But the drama blends seamlessly into a comedy. Or somewhat seamlessly anyway!

First sentence: "Belle," said my mother, in tones bordering on despair, "what shall I do with you?"

Premise/plot: Belle/Kate is on her way to becoming this generation's black sheep of the family. It is a good thing her 'poor Aunt' (the black sheep of her generation) shows up just in time to offer her refuge. Belle has never been so delighted to be herself and live life on her own terms.

My thoughts: I'm not sure the daughter's rebellion is all that rebellious. By modern terms she is just practicing common sense. Her mother is desperate for her to marry and she's picked out the somebody. The daughter doesn't want to marry someone she doesn't love, like, or even know. Is it such an odd idea that a woman could look out for herself and be independent?

This story is slightly confusing. The first sentence the daughter's name is implied to be Belle. Yet a few pages later she's called Kate. And at one point the text states that Aunt Kate has come to help her namesake niece. So if that's the case, why does the first sentence call her Belle?!

First sentence: It is very seldom that mere ordinary people like John and myself secure ancestral halls for the summer.

Premise/plot: A new mother takes a 'relaxing' vacation with her family. But the room where she's staying has unsettling YELLOW wallpaper. Did she arrive at the rented house mentally disturbed? Or did her illness come on slowly and surely over the course of weeks as she stays in this room?

My thoughts: "The Yellow Wallpaper" is a story I've encountered many times in my past in various college courses. It holds up well with my memory of it. It's a masterfully disturbing story. In just a few pages, Gilman creates an unforgettable narrator and some haunting scenes.

First sentence: Andrew's letter and Jean's letter were in Mrs. Morrison's lap. She had read them both, and sat looking at them with a varying sort of smile, now motherly and now unmotherly.

Premise/plot: A mother resists giving up her home and going to live with one of her children. Can she find a way to stay financially independent and in her own home? Can she prove to her children--and to her would-be suitor--that she is just fine on her own. Just how creative and resourceful can one determined woman be?!

My thoughts: Of the stories I've read so far this might be the most satisfying. It perhaps isn't as masterful or as memorable as 'The Yellow Wallpaper' but it is emotionally satisfying in a way the other is not because the woman IS a success.

"Her Housekeeper" (1910)
First sentence: On the top floor of a New York boarding-house lived a particularly attractive woman who was an actress.

Premise/plot: Mrs. Leland has determined to never, ever, ever, ever marry again. She has her reasons. But one persistent wooer is willing to go above and beyond to prove that he loves her just as she is. Will she marry him?

My thoughts: I found this story to be entertaining. Mrs. Leland has her quirks particularly considering her times. In 1910, Mrs. Leland would have been a nonconformist at best and an immoral or loose woman at worst. She was all about her freedom and independence. And she loved to have many, many lovers. I'm not sure if lovers means sexual partners or just flattering suitors who lavished her with attention. Regardless of what Gilman meant, it would have been outside the image of propriety

"When I Was A Witch" (1910)
First sentence: If I had understood the terms of that one-sided contract with Satan, the Time of Witching would have lasted longer--you may be sure of that.

Premise/plot: This one is written in the first person. A woman has a really HORRIBLE day and starts making wishes that more resemble curses--if wishes had any power. She comes to find out that suddenly her cherished grudges--her wishes--do. But will this power last?

My thoughts: This comedy has plenty of drama...but even more so it has OPINIONS. Opinions on what is right and wrong with the world.