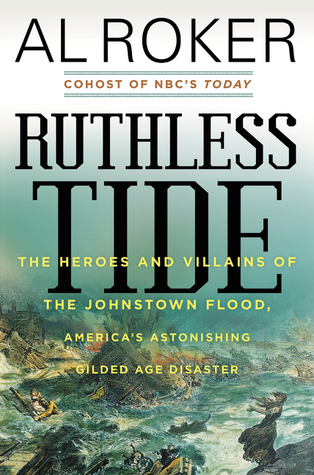 First sentence: "Johnny, who made the world?" The Sunday School teacher asked. That was easy. "The Cambria Iron Company!" the boy replied. That's the story they like to tell, anyway, in and around Johnstown, Pennsylvania, in 1889. Little Gertrude Quinn was only six that year, and even she, like the fictitious Johnny, knew how important iron and steel and the Cambria Works were to the life that she, her family, and everybody they knew were living here in the deep valley of the Conemaugh River under the abrupt rise of the Allegheny Mountains.

Premise/plot: Ruthless Tide is a new nonfiction book about the Johnstown Flood. The first third is about what led to the disaster. The iron and steel industry. The erosion of the land. The building of the dam and lake. The selfishness then negligence of the sports club. This section includes mini-biographies of men like Andrew Carnegie, Daniel J. Morrell, Benjamin Ruff, Henry Clay Frick, etc. The second third is about the disaster itself: first the flood, then the dam breaking, and finally the fires that burned as a result of the destruction. This section introduces or in some cases reintroduces readers to the men, women, and children of the town(s) in the path of the monster. It is a limited account, but, better to follow a few accounts that are based on published accounts than to follow hundreds of fictional accounts. The last third is devoted to the aftermath of the disaster. It's titled" Justice and Charity." Here readers see the Red Cross stepping into the scene of a disaster and gaining attention and respect for their relief response. Also readers read not of the justice of the legal system but the injustice of it.

My thoughts: I read this in one evening. I found it an interesting read. I've read reviews criticizing the writing, but for me I wasn't paying attention to the writing but to the content.

Do I ever read a book and count the words in a sentence? Do I ever consider the length of the sentences in any given paragraph? Am I hyper-critical of any writer? Oh, that sentence would have sounded better if it had had seven words instead of five.

Perhaps just perhaps people are super-critical of the "writing" because of the author being a celebrity, Al Roker.