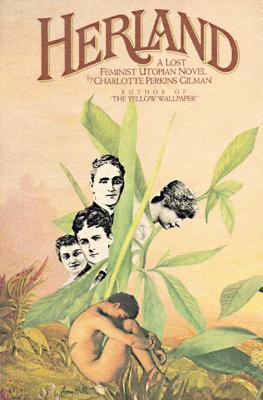 First sentence: This is written from memory, unfortunately. If I could have brought with me the material I so carefully prepared, this would be a very different story.

Premise/plot: Vandyck Jennings is a sociologist traveling or exploring with Terry O. Nicholson and Jeff Margrave. On one of their trips they hear rumors of a 'strange and terrible Woman land...this strange country where no men lived--only women and girl children.' They don't have time on this first trip to seek it out, but, they become determined to return on their own and find it next year. Return they do, and they think they've packed, planned, and prepared all they need. But they could not begin to imagine the reality of Herland.

Herland is a utopian adventure story. Van, Jeff, and Terry venture into Herland, are 'captured' by the women, educated by the women, and eventually given some freedom. Perhaps not all the men were worthy of that freedom.

The education of the men gives Gilman an opportunity to info dump about the world she has created. (Though we learn little of their native language--perhaps Gilman was no Tolkien.) Readers learn alongside of Van, Jeff, and Terry two thousand years of history. How did Herland come into existence? Where there ever men? How do the women reproduce without men? How are children raised? What is society like? How has their society evolved through the centuries?

Info dump isn't quite the right word. It also gives Gilman an opportunity to explore the ideas and philosophies of this 'utopian' world and to a certain extent the real world as well. Gender roles being a subject that is front and center of the whole novel. What does it mean to be feminine? to be womanly? What is natural? Are the stereotypical notions of femininity just a reflection or reaction to masculinity. Without the masculine how would the feminine have developed or evolved?

She spends one whole chapter on the religion/faith of Herland and how it compares to Van's Christianity. In Herland, there is no sin, no punishment, no crime, no criminals, no need for a Savior, no need for a sacrifice, no need for heaven or hell, no need for laws or rules. Society has almost agreed upon a list of ideals and lumped them together into the notion of God and decided to live as if God were real and express in their lives those same ideals.

The concept of 'home' does not exist. Babies and children are raised collectively, taught collectively, work collectively. You might give birth to a baby but not be active in raising it. The most qualified do the raising. All generations belong to one another--there are no individual families or homes. No child belongs more to one person than another. Pride is felt collectively.

Just as the most qualified do the raising, only the 'most qualified' the 'best sorts' of women are allowed to have children--to will them into existence by their deep longing for Motherhood. Other women are discouraged from longing and are directed to focus their thoughts, their energies elsewhere. By not allowing everyone to have children, they ensure that only the best qualities are passed on from generation to generation.

My thoughts: I found Herland to be a quick read. I read it in one evening. Every time I thought about putting down the book, I decided I just had to read one more chapter. So without a doubt I found it an engaging read.

I was thankful there were three male characters. Jeff adapted the easiest to the new country. It didn't take him long at all to decide that he had come home at last and this is where he wanted to live the rest of his life. Herland was his paradise.

Van was open-minded. He was always ready and willing to discuss any and all aspects of the culture and compare them to the outside world, to America in particular. He was respectful and genuine. I think Van represented hope for the world, that men could be taught to accept women as equals if not superior at times.

Terry was close-minded. There was no changing his mind. He had a one track mind; women were objects to be TAKEN, to be owned, to be mastered, to be ruled, to be possessed. Terry didn't care about ideas and thoughts and feelings. Some form of justice was carried out against Terry.

I'm not sure what I think of the world Gilman created. I certainly disagreed with some of her ideas or notions. Her utopia is not every woman's utopia. And her notion of Utopia was created in 1915 is in some ways dated and problematic. Some aspects were just disturbing.