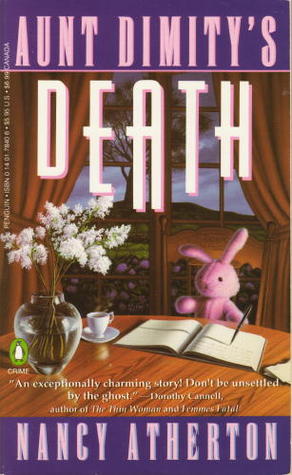 First sentence: When I learned of Aunt Dimity's death, I was stunned. Not because she was dead, but because I had never known she'd been alive. Maybe I should explain.

Premise/plot: Lori Shepherd is down on her luck. Within a (relatively) short amount of time, she's gotten divorced, lost her job, and her mother has died. But when a letter finally catches up with her, her life is potentially changed forever: a lawyer has contacted her. It seems that she's mentioned in Aunt Dimity's will.

Lori grew up hearing her mother tell Aunt Dimity stories; they were bedtime stories. Lori thought that Aunt Dimity was a fictional creation of her mother's making. But Dimity was a real person--a person that her mother met and befriended in England during the second world war. The two had kept in touch--corresponded after the war.

Aunt Dimity wants Lori to go to England, stay in her cottage, and sort through that correspondence. Ultimately Lori will need to write an introduction to a collection of stories--Aunt Dimity stories. But she won't be going alone. The lawyer's son, Bill, will go with her and help her.  That is what her lawyer is expecting her to do...but a letter from her mother adds to her mission.

My thoughts: I loved, loved, loved, loved, LOVED this one. I'm a little mad at my library that the next book in the series which they have is #8. (Then another big jump to either #12 or #13). If you love cozy mysteries, I think you will love this one just as much as I did. But even if you don't love, love, love mysteries...if you love romance then there's still a good chance that you'll still end up loving it. It has a very 90s rom-com feel to it. In a good way. In a satisfying way. If this was ever adapted into a movie or television series, I'd want to watch it again-again.

I've read a few Aunt Dimity mysteries. I like them even though I think some of the premise is a little far fetched. I don't think I've read this one, though.

I like Aunt Dimity mysteries, they're nice fluff. Although I never can figure out the timeline. Lori is clearly supposed to be about my age, in her mid-20s in the 90s. Yet her mother went through WWII. My mother is a Baby Boomer, a child of the generation that went through WWII. Nobody who was a young woman in the 1940s could have had a child in the 1970s, 30 years later. Oh well, I still like the stories.