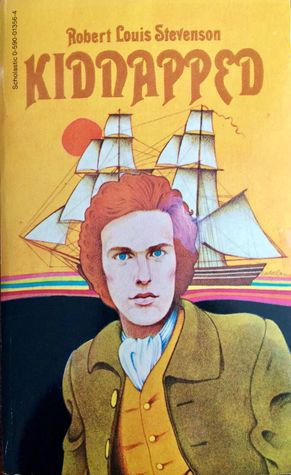 First sentence: I will begin the story of my adventures with a certain morning early in the month of June, the year of grace 1751, when I took the key for the last time out of the door of my father's house.

Premise/plot: When David Balfour's father dies, he sets out on a journey to meet the uncle he never even knew he had. There had been--he reasons, and rightly so--a falling out between the two brothers. But with his father's letter to his brother intact, he sets out with few expectations. Will his uncle welcome him with open arms? Will his uncle invite him to live with him? Will his uncle assist him in getting established in a profession? Will his uncle send him on his way?

Soon after he arrives in the village/town where his father lives, he begins to ask for directions. Every person that he meets gives him a) either a strange look b) strange warning or c) both of the above. It seems this uncle is little respected, much feared. Though he's been warned NOT to make his uncle's acquaintance, he reasons, well, I've come this far already it would be just silly not to go through with my plans.

Can you guess how the meeting goes?

My thoughts: If Kidnapped was a Choose Your Own Adventure book, the version I'd read would be very short! If given the option of choosing to meet the uncle or not meet the uncle, then I'd have him go back to his own neighborhood and trust in the friends he knows versus the family he doesn't.

Though David Balfour's choices would not be my own, I have to say this one is PACKED, absolutely packed, with action and adventure and twists and turns and DRAMA. And I suppose I should have mentioned before now that this one is set in Scotland where feudal disputes and violence abound...

I found this a compelling read. It was INTENSE and enjoyable. Alan Breck and David Balfours certainly know how to keep you turning pages....


"Captain," says Alan, "I doubt your word is a breakable. Last night ye haggled and arglebargled like an apple wife; and then passed me your word, and gave me your hand to back it; and ye ken very well what was the upshot. Be damned to your word!" says he. (86)

Charles the Second declared a man could stay outdoors more days in the year in the climate of England than in any other. This was very like a king, with a palace at his back and changes of dry clothes. (113)

I have seen wicked men and fools, a great many of both; and I believe they both get paid in the end, but the fools first. (118)

At first I proposed I should give him for a signal the "Bonnie House of Airlie," which was a favorite of mine; but he objected that as the piece was very commonly known, any ploughman might whistle it by accident; and taught me instead a little fragment of a Highland air, which has run in my head from that day to this, and will likely run in my head when I lie dying. (239)