For the Love of Mike 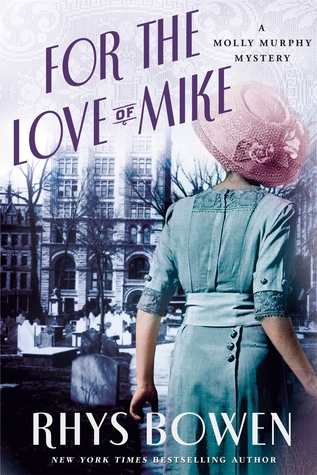 First sentence: Actually I had been guessing at the time.

Premise/plot: Molly Murphy is determined to be a private investigator. In this third book in the series, she is working on two cases at the same time. One case has her going undercover at a garment factory. Another case has her looking for a missing person--a runaway daughter. Will she be able to solve both cases and collect her fees? Or will these cases prove too challenging and dangerous? Could Molly Murphy lose her life in the attempt to be a private investigator?

My thoughts: This is the third Molly Murphy mystery I've read.

I'll start with the good news. I like that the books build upon one another and that we're still catching glimpses of people we've met in books one and two. This seems like a good way to build a believable world--people it. Some are mere background players but others are becoming central to the plot.
Now for the bad news...

Are readers supposed to actually like Molly Murphy? Are we supposed to find Molly Murphy fierce, brave, empowered, independent, ahead-of-her-time? Because this reader is mostly finding Molly Murphy to be lacking any and all common sense. Are readers supposed to find her blunders and near-misses charming and adorable? This reader doesn't. It is not that I want Molly Murphy to actually suffer the consequences of her incompetence. I don't want her to be raped, molested, kidnapped, or killed. I don't. But at this point, she needs a team of men to follow her around to protect her from herself--her brave, daring, independent escapades and adventures. And surprisingly enough, that team of men actually exists. Men are fighting over her. They're also yelling at her, telling her not to be so stupid, but...they don't see her lack of sense as a bad thing...they actually want to be with her.

This touches on the second annoyance of the series...the "romance." In the first book, Molly fell for a police officer, Daniel Sullivan. He seemed to be equally smitten with her. It looked like it was going to be heading towards a happily ever after. But a few chapters into the second book--perhaps less--readers find out he's been engaged to another woman this whole time. Daniel seems to be hero who pops up dozens of times in each book to SAVE MOLLY FROM HERSELF. She then whines about how she hates to be "saved" by Daniel and how she wants to never, ever see him again. She also seems to be mourning the fact that he won't choose her. If Molly really and truly wants to never see Daniel again--perhaps she could work harder at NOT BEING ARRESTED or brought to the station for questioning. Perhaps if she avoided potentially dangerous situations altogether--going into gang hang-outs, for example, to ask her questions.

Right now there are TWO men "in love" with Molly. Because I actually like Jacob, I'm thinking he deserves better than Molly.