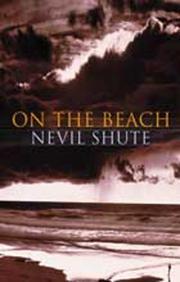 First sentence: Lieutenant-Commander Peter Holmes of the Royal Australian Navy woke soon after dawn.
Premise/plot: On the Beach is a behind the scenes glimpse of the end of the human race as seen through the eyes of an American (Dwight Towers) and several Australians (Peter and Mary Holmes, Moira Davidson, John Osborne). It is set after an extremely brief but devastating war. There is only one way this one will end—the death of every single character. Not even Shakespeare was this brutal. The novel poses the question: is war worth it? When all is said and done is pride, greed, ambition, love of power, stubbornness, selfishness, the need to be right...worth the extinction of humanity. In case you didn’t pick up on it, this one is a bit didactic or agenda-driven. Nuclear warfare is bad, bad, all kinds of bad. It’s a lose/lose situation. It is preventable if everyone uses common sense. It is too late for the fictional world Shute has created, but it is not too late for us in the real world.

My thoughts: This novel is bleakity-bleak. Hope is not to be found here. It isn’t just that life as we know it is over...it isn’t that we’ve been sent back to the dark ages...it isn’t that 80% of the population has died. No. Every human on the planet is either dead, dying, or soon to be dying. Death is stalking the characters, creeping closer and closer as the seasons change and the wind blows the poison—the radiation—closer and closer. The book isn’t about the destination, but the journey. How do these characters choose to live day after day knowing what it is coming?! What changes? What stays the same? Who do they choose to spend time with? What do they choose to do? How do they cope? Do they cope?

I don’t expect every apocalyptic novel or post-apocalyptic novel to deal with religious themes or undertones. God is not to be found within this one. None of the characters believe in God or even a god. Faith and religion—spirituality—is not a part of this one. None of the characters seem to believe in heaven or hell.
This would not be at all surprising if published now, but would it have seemed so in 1957? Would readers have wondered why the characters didn’t pray, make peace with God, find comfort in a faith community?

I also wonder if it would have been controversial at the time it was published in regards to how it ended. Having pills ready and waiting at the pharmacy available for request—free of charge—to anybody who wants the “dignity” of ending their own life. I think times have probably changed in regards to this as well.

The hardest part was the fact that Peter and Mary have a baby. They have to plan to kill their baby so that she is not left on her own in case she outlives her parents.

If there is a theme it is live for today because humans are stupid.

I love Shute's book A Town Like Alice, but I just can't make myself read this one. Maybe because it is so bleak.