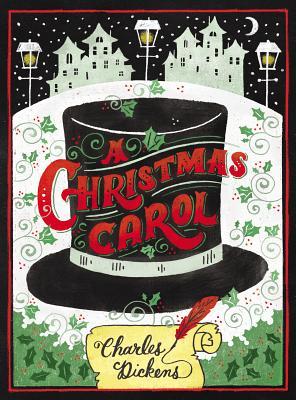 First sentence: MARLEY WAS DEAD, to begin with. There is no doubt whatever about that.

Premise/plot:  Who isn't familiar with the story of Scrooge?! Still, I suppose *something* must be said. Scrooge HATES Christmas. Hate is too soft a word really for the rage he feels when he thinks about the holiday. For Scrooge hating comes as naturally as breathing. He loves no one or no thing--nothing except money and making a profit. But what is driving his obsession with money? what is driving him to live as he does--to make the choices he does? Could there be a secret or two in his past that holds the answers to these questions? Can Scrooge be saved from his own worst enemy--himself?

If Scrooge is to be saved--can he be saved?!--it will take some supernatural intervention. For Scrooge won't be saving himself. For one thing, Scrooge does not see his own need to be saved. Saved from what exactly?!?! Saved from success?! As far as Scrooge is concerned, everything in his life is just as it should be. He in need of help? he in need of saving? Don't be ridiculous.

He will be visited by four ghosts--the first ghost being Marley, his dead business partner of old. The other three ghosts being Christmas spirits past, present, and future. Can these spirits open Scrooge's eyes? Will he start to see--will he start to judge--life differently?

My thoughts: A Christmas Carol is a familiar story--much like the gospels. Is it too familiar a story to pack a punch or two? It doesn't have to be. The truth is--like it or not--we are more like Scrooge than we want to admit. We may not hate Christmas. We may not be super-obsessed with money. We may even consider ourselves good, charitable people. But the truth is that we are all sinners; perhaps I should amend that to we are sinners one and all. At best we can say our pet sins differ from his. All of us need a ghostly encounter to reconcile us with ourselves, the world, and God. I would point out, however, that we need a Holy Ghost encounter, and not one from Marley and the three ghosts of Christmas past, present, and future.

When I first read A Christmas Carol, I was less than impressed with this "Christ-less" Christmas story. I still loved the Muppet Christmas Carol; I still loved the idea of loving this one. But I found grace to be missing; here was Scrooge a brand new man with a brand new outlook, but no profession or confession of belief or trust in the one true God. The message was not Jesus paid it all; all to him I owe. The emphasis was not that Christ was sufficient--that Scrooge's only hope in life or death was Christ alone. The emphasis seemed to be on outward change, on works. On reflection this time around, I see A Christmas Carol more like the letter of James than any of the four gospels. In spiritual terms, what we're dealing with is not justification--how to be made right with God, how to be saved--but sanctification--how to live life rightly.

Here are a few scriptures to keep in mind as you read A Christmas Carol:


My tip for reading A Christmas Carol: try to read it as if for the first time.

I LOVE A Christmas Carol; however, I know you are right. I'm re-reading right now, and your Scripture references will come in handy. It is a beautiful story, but it is missing the purpose of a changed heart. Thank you for sharing this.