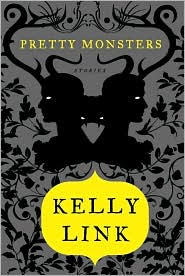 Link, Kelly. 2008. Pretty Monsters. Penguin (Viking) 389 pages.
Pretty Monsters is a short story collection by Kelly Link. The stories are speculative fiction, or to be more precise, fantasy. There are nine short stories in this collection--eight of these have been published previously. The only new story is "Pretty Monsters." (It's entirely possible that you might have read a few of these stories before.) The stories featured in this collection are:
The quotes are the caption-teasers which accompany Shaun Tan's drawings for the stories.
I'll start with the 'bad news' of the review. I really, really disliked the last story "Pretty Monsters". It's sad that the only original (new) story of the collection is one that I disliked. Sad but very true. Maybe other readers will enjoy this one. Maybe they can begin to comprehend it. But for me, not only did I not understand it the first time round, I didn't think it worth trying to make sense of. It seems the intention was to confuse and scramble readers. Maybe Link was hoping that this confusion would lead readers to the conclusion that she was a genius storyteller. Or maybe she was just trying to challenge her readers to really think and question everything. I think perhaps if this one had been shuffled into the middle of the collection, with better stories coming before and after, it would have worked better...for me. With the last story leaving such an impression on me, it didn't speak so well for the whole.
Now to the good news. The other eight stories. I found myself really liking "The Faery Handbag", "The Wizards of Perfil," and "The Constable of Abal." And I liked "The Wrong Grave" and "Magic for Beginners." Those five stories were enjoyable ones. I had positive reactions to them all. I really enjoyed the quality of the stories. The plot. The characters. The storytelling. I liked Link's narrative style in these stories. I thought they were really strong, well-done pieces. I think quite a handful of these could be expanded into a full-length novel. I think it would be a good thing to spend more time with these characters and explore these new worlds further.
"The Specialist's Hat," "Monster," and "The Surfer" were stories that I was more indifferent too. I think "The Specialist's Hat" will appeal more to other readers. (Readers participating in Carl's R.I.P challenge this fall perhaps. And it would make for one spooky and atmospheric novel if it was expanded.) "Monster" was an okay story. It just didn't capture my interest as much as some of the others. "The Surfer" was the one story I was already familiar with going into the collection. I liked elements of it--no doubt--the part that included a suitcase or two full of paperback science fiction. But I didn't enjoy it as much as the others in the collection--with the exception of Pretty Monsters that is.
Short story collections are hard to describe, in a way. All reading is subjective. But short story collections are even more subjective. There are nine stories for readers to judge: to love or hate or be indifferent too. Nine chances to engage the reader. Each story can be hit or miss with the reader. And each reader is different. There's no predicting how you will like a story.
I found much to enjoy in this one. Yes, I felt really strongly about the story "Pretty Monsters." But I don't want to negate the positive reactions I had to earlier stories in the collection. I really enjoyed some of the stories. And some of these stories are ones I'd happily recommend to readers.
© Becky Laney of Becky's Book Reviews
Posted by Becky at 10:38 AM

I've been wanting this book for a while, and I think I'll still buy it one of these days. Though I may just skip "Pretty Monsters"...oh, or maybe I'll just read it first and get it out of the way. "The Surfer" is the only one I've read before, and I actually enjoyed it quite a bit. Except for the end. Which just seemed too sudden. I think that story easily could have been worked into a full length novel that then would have allowed for a much more satisfying ending.

I've heard pretty good things about this collection and her other one, Magic for Beginners. I haven't yet tried one, but I am thinking that I should try to do that soon. I'm glad that you mostly liked these stories.