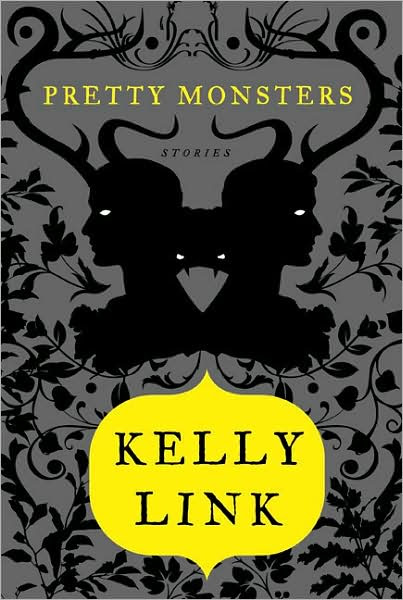 I was pleased to take part in Nerds Heart YA. I teamed up with Kailana to review Pretty Monsters by Kelly Link and The City in the Lake by Rachel Neumeier. One of these books will move along in the competition. But which one will it be? Read our reviews and see! Kailana will be featuring The City in the Lake. We decided on a question/answer (interview style) for our reviews. You'll find her thoughts--and my thoughts--over at her review. I'll be featuring Pretty Monsters by Kelly Link.

There is something very striking about the cover for Pretty Monsters. It made me curious. It made me want to know what it is about. From the cover, I guessed that it would be a bit weird, a bit strange, but I hoped to find it a strange kind of wonderful. So I was drawn to reading it. I wanted to read it. I think the cover adequately conveys the content. But I'm not sure the images are inspired by any one story in particular. (Not that it has to be!) So if the Nerds Heart YA contest was decided by judging a book by its cover, then my vote rests with Pretty Monsters.

Is this your first time to read Kelly Link?

Did you enjoy the decorations by Shaun Tan? Do you think they added anything to the book?

I thought they were a nice touch. I looked forward to seeing each one. Granted that may be because each one was found at the beginning of a new story. And it was a great way to transition from one to the other. But were they absolutely essential to the book....not really. But as I said, they were a nice touch.

What would you say if you had to describe Kelly Link's writing style?

It is light, conversational, and at times quite humorous. There were lines in each story that I think were there to lighten the mood and make the reader smile. Like the author wanted to create inside jokes with each reader. Like the author could poke fun at her characters. Not every story follows this style. But quite a few do. And it is her way with words that kept me reading.

What do you think is the book's strength?
Her writing style! Definitely. Each story has a mood of its own. There are nine stories in all: "The Wrong Grave," "The Wizards of Perfil," "Magic for Beginners," "The Faery Handbag," "The Specialist's Hat," "Monster," "The Surfer", "The Constable of Abal," and "Pretty Monsters." I think the collection gets off to a good start. The first few stories I found quite enjoyable and unique. For example, I love how "The Wrong Grave" begins,

"All of this happened because a boy I once knew named Miles Sperry decided to go into the resurrectionist business and dig up the grave of his girlfriend, Bethany Baldwin, who had been dead for not quite a year. Miles planned to do this in order to recover the sheaf of poems he had, in what he'd felt was a beautiful and romantic gesture, put into her casket. Or possibly it had just been a really dumb thing to do. He hadn't made copies. Miles had always been impulsive. I think you should know that right up front."

This is typical Link, in my opinion, many (if not all) of her stories have a way of making you curious right from the start by having a great first line. Like "The Wizards of Perfil" which starts with,

"The woman who sold leech grass baskets and pickled beets in the Perfil market took pity on Onion's aunt."

What do you think is the book's weakness?

I'm going to contradict myself. (It won't be the last time, I imagine). Her stories are both too long and too short. I felt at times the characters were underdeveloped for the length of the story. A story could be really long--more a novella than a short story--and yet at the end of it, I'd still feel like I hadn't gotten a chance to really connect with the characters. Not all the stories in this collection. But a few. There were stories were I felt connected with the characters, wanted to know more, in fact wouldn't mind having a full-length novel starring these characters. But. The stories I didn't like seemed to go on forever. And the stories I enjoyed seemed to end much too soon.

How does this compare to other short story collections you've read?

It does fairly well within the fantasy/sci-fi genre. I'm not a big reader of short stories in general. (With the exception of L.M. Montgomery who can do no wrong.) I've read some Orson Scott Card short stories. And I've read some anthologies (multiple authors) featuring speculative fiction short stories. But my problem is almost always the same, I have a hard time connecting with the characters in such a short time. Not always, some authors can make a character come alive in a very short amount of time. Some authors make you care within a paragraph or two. But typically, my reaction to short story collections is that I like two or three stories and the rest I'm indifferent too. And this one was like that for me. The few stories I enjoyed, I really enjoyed. But I didn't love every story in this collection.

Which short story is your favorite? Why?

I enjoyed quite a few of them actually. "The Wrong Grave" and "The Wizards of Perfil" were probably my top two. "The Faery Handbag" had an interesting premise. (One that I wouldn't mind seeing developed into a longer novel.) And I was relieved to get to "The Constable of Abal" after having read the three stories in between. But I was rather disappointed in Pretty Monsters. That one left a bad taste in my mouth. I just didn't like it. At all. I think if the book had ended on a different note, a stronger note, then my general impression of the book would be different.

Who would you recommend this book to? Do you think it's a book that both young adults and adults can enjoy?

I would recommend this one to fantasy lovers. Specifically fantasy lovers that like short stories and/or novellas. You don't have to love short stories to enjoy the book. It just depends on your mindset. Are you looking to find one or two good reads, short reads that you will have been happy to read? Then short story collections aren't ever a waste of your time. If you want to be completely satisfied with each and every short story you come across in a collection, then that "perfect" book is near impossible to find. I think you can appreciate this one for what it is. It doesn't matter your age. Adults have been enjoying fantasy stories about young people coming of age for a very long time.
Concluding Thoughts:
Have you read Pretty Monsters? Have you read The City in the Lake? Do you have a favorite between the two? Which do you think should move on in the competition? Do you agree with our decision? Which would you be more likely to want to read?
© Becky Laney of Becky's Book Reviews
Posted by Becky at 8:00 AM

Ooh, I hadn't heard of this book, but after reading your review, I don't think I'll read it either. I love the cover, and I usually like fantasy but I'm not a fan of short stories.

Shame I've heard big, great things about Kelly link (and yes I love the cover, sometimes I just like pretty things). Off to read your second choice review (are you twittering your posts because I can't find them...)

"The Surfer" is the only thing I've ever read by Kelly Link, too. I've been tempted to buy this book on more than one occasion...because the cover is so gorgeous and because I did enjoy "The Surfer" (though I think it could have been better if turned into a full length novel). I think you two lovely ladies have told me enough to think it's worth picking up...thanks!

I have been interested in giving something by Link a try for some time now. It doesn't sound as though this is the place to start though. Thanks for your honest opinion.