Margaret Mitchell & John Marsh: The Love Story Behind Gone With The Wind 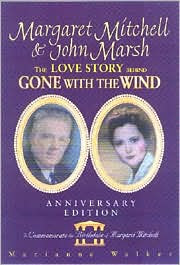 Thanks for answering my question! I loved 'Gone With The Wind' when I was younger, but haven't read it in a long time. I think this sounds like a cool way to go back to the book again.

I have been looking for a good biography for my book club, and think that this one could work, being as so many people in the club have probably read Gone with the Wind. I would have never come across this one on my own, so thanks a bunch!