The Vast Fields of Ordinary (YA) 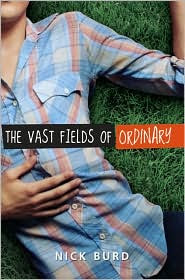 I spent a good part of my senior prom drawing DH +PS in a giant heart in the last stall of the Cedarville High boys' bathroom. It covered the entire wall and took two red markers and almost an hour to complete.

Dade Hamilton's prom isn't going all that well. You see, his boyfriend, Pablo Soto, is there with his girlfriend. Yes, Pablo, Dade's lover, has a serious girlfriend. A bit ironic, in a way, that Pablo the one who's so firmly in the closet, was the aggressor in the relationship, the initiator of the affair. What is clear to the reader--though not necessarily to Dade--is that this "relationship" is only about the sex (and power), and it's more than a little unhealthy. Pablo is seriously bad news. Fortunately, a better guy is just around the corner for Dade. The summer after graduation he meets Alex Kincaid. And in this first 'real' relationship, Dade begins to better understand what love is all about. But his past--Dade's past--keeps intruding into the present. Pablo is a bitter ex. A serious manipulator. And Dade isn't finding him so easy to ignore. Even if he can avoid falling back into Pablo's bed, he can't so easily stop thinking about him.

What did I like about this one? I liked the healthier choice, Alex.

What didn't I like about this one? Pablo. There's something dark and twisted about Pablo and his relationship with Dade. And Dade has problems recognizing this clearly. And I'm not sure how I feel about it that it takes Dade meeting Alex and realizing that there are other guys out there to love that makes him realize that he's worth more than that. That it takes an Alex for Dade to realize that Pablo is wrong for him. If he'd never met Alex, would he have stuck with Pablo? If Alex had been straight, if he'd not been interested in Dade, would Dade still be taking abuse from Pablo?

I think Dade has other issues as well. He's not a particularly nice guy. He's a bit selfish and short-sighted. A bit me-me-me. He's not so considerate of others. He doesn't like being picked on, but he likes to pick on others. He wants people to treat him with respect and dignity, but he's not above using and abusing others. I didn't like the way Dade treated others. There were places he was meaner that I wanted him to be. Is this authentic? Yes and no. Dade's being selfish and inconsiderate doesn't make him unique, it just makes him human. Okay, it makes him a bit immature, and you keep hoping he'll grow out of it and realize it. But no one's perfect.

Hmmm...your review left me a bit undecided on this one. It sounds good but I'm not sure if I would enjoy it or not. Thanks for sharing about it though :)

Man, you were a lot nicer than me, but I am SO GLAD I am not alone in my feelings about this book! Abuse! Immature brat as the main character. I don't know; I guess I wanted Dade to be more sympathetic without having to use the "but oh, he's a VICTIM" card. Sigh! I also feel like he didn't end the book much of a different person than he started, which was disappointing. I like characters to change a LITTLE. ;_;

I truly enjoyed this book. I finished reading it yesterday after accidentally buying it, and I love it!

I love how you said that last big about the me-me-me. "Dade's being selfish...doesn't make him unique, it just makes him human." Good line.
You know, I always hate those freaky obsessive types.
Nice review.