In the latter days of July in the year 185--, a most important question was for ten days hourly asked in the cathedral city of Barchester, and answered every hour in various ways. Who was to be the new Bishop?

Barchester Towers is the second novel in Trollope's Barset series. The first in the series, The Warden, I reviewed several months ago. What characters carry over to the second one? Mr. Harding, the former warden, and his two daughters: Susan, married to Dr. Grantly, the archdeacon, the son of the very recently deceased Bishop, and Eleanor Bold, a (somewhat-recent) widow and the mother of young Johnny Bold. 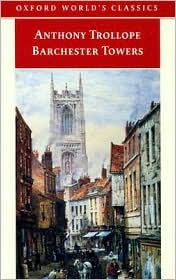 The novel is a romantic comedy of sorts. Eleanor, a widow, is quite the catch and there are plenty of men in the neighborhood who would do almost anything to win her heart. But not all of them are worthy of it. And some of them are more interested in her money than in her. Her three suitors are Mr. Obadiah Slope (boo, hiss if you like, trust me he deserves it!), Mr. Bertie Stanhope, and Mr. Francis Arabin. Two of the three are church men. Mr. Slope is chaplain and in the employ of the new bishop, Mr. Proudie. And Mr. Arabin is the vicar of St. Ewold. Mr. Stanhope is a gambler mostly, an idle man who thinks only of living in the moment. Does Eleanor want to be courted? Is she looking for a second husband? A step-father for young Johnny? Whether or not this is the case, it can't be denied that the men in the neighborhood are looking at her.

I said Barchester Towers is a comedy, and that is very much the case. Comical characters abound in Barchester Towers! Mr. Slope. Dr. Proudie. Mrs. Proudie. Those three can get into so much trouble all on their own! I feel a bit sorry for Mr. and Mrs. Quiverful and their fourteen (living) children, a family that gets caught in this tug-of-war power play. Will he or won't he be named the new warden? And those are just a handful of the characters we meet in this second novel. There are the Stanhopes (including the married and attention-grabbing Madame Neroni), the Thornes, and the lower-class sort including the Lookalofts and the Greenacres. I believe Miss Thorne's party is the delight of the novel--spanning about eight chapters.

The order of the day was to be as follows. The quality, as the upper classes in rural districts are designated by the lower with so much true discrimination, were to eat a breakfast, and the non-quality were to eat a dinner. Two marquees had been erected for these two banquets: that for the quality on the esoteric or garden side of a certain deep ha-ha; and that for the non-quality on the exoteric or paddock side of the same. Both were of huge dimensions—that on the outer side was, one may say, on an egregious scale—but Mr. Plomacy declared that neither would be sufficient. To remedy this, an auxiliary banquet was prepared in the dining-room, and a subsidiary board was to be spread sub dio for the accommodation of the lower class of yokels on the Ullathorne property.

No one who has not had a hand in the preparation of such an affair can understand the manifold difficulties which Miss Thorne encountered in her project. Had she not been made throughout of the very finest whalebone, riveted with the best Yorkshire steel, she must have sunk under them. Had not Mr. Plomacy felt how much was justly expected from a man who at one time carried the destinies of Europe in his boot, he would have given way, and his mistress, so deserted, must have perished among her poles and canvas.

In the first place there was a dreadful line to be drawn. Who were to dispose themselves within the ha-ha, and who without? To this the unthinking will give an off-hand answer, as they will to every ponderous question. Oh, the bishop and such-like within the ha-ha, and Farmer Greenacre and such-like without. True, my unthinking friend, but who shall define these such-likes? It is in such definitions that the whole difficulty of society consists. To seat the bishop on an arm-chair on the lawn and place Farmer Greenacre at the end of a long table in the paddock is easy enough, but where will you put Mrs. Lookaloft, whose husband, though a tenant on the estate, hunts in a red coat, whose daughters go to a fashionable seminary in Barchester, who calls her farm-house Rosebank, and who has a pianoforte in her drawing-room? The Misses Lookaloft, as they call themselves, won't sit contented among the bumpkins. Mrs. Lookaloft won't squeeze her fine clothes on a bench and talk familiarly about cream and ducklings to good Mrs. Greenacre. And yet Mrs. Lookaloft is no fit companion and never has been the associate of the Thornes and the Grantlys. And if Mrs. Lookaloft be admitted within the sanctum of fashionable life, if she be allowed with her three daughters to leap the ha-ha, why not the wives and daughters of other families also? Mrs. Greenacre is at present well contented with the paddock, but she might cease to be so if she saw Mrs. Lookaloft on the lawn. And thus poor Miss Thorne had a hard time of it.

And how was she to divide her guests between the marquee and the parlour? She had a countess coming, an Honourable John and an Honourable George, and a whole bevy of Ladies Amelia, Rosina, Margaretta, &c she had a leash of baronets with their baronnettes; and, as we all know, she had a bishop. If she put them on the lawn, no one would go into the parlour; if she put them into the parlour, no one would go into the tent. She thought of keeping the old people in the house and leaving the lawn to the lovers. She might as well have seated herself at once in a hornet's nest.

Anthony Trollope is fast-becoming one of my favorite authors. I am just falling in love with him. His style, his wit, his humor, his characterizations. The way he can talk about anything (and everything) and make me care. Even the bad guys. Trollope develops these scummy characters with such grace and charm that even though you know they're no good, you enjoy spending time with them.

Wow - what a surprise! - a lovely surprise.:) But yesterday you were "just fooling around" that you were reading it - and here it is, not only finished, but also reviewed! And a lovely review too - as you know, it's one of my favourites. L.

I absolutly love this series! Thank you for your review! I'm actually reading THE WARDEN for my own book review blog, http://taylorsbookthoughts.blogspot.com/, and I'm thinking of parring it with DEATH COMES FOR THE ARCHBISHOP.

I would love to hear a review of the second book from you too!

Thanks again for sharing!

You review some very interesting classics, and you do a great job at it! I haven't read this one, but I am thinking of putting this series on my list, thanks to your reviews. This sounds like a great book, and I'm sure the first one is good too.

I can't help but get a warm feeling for all fellow Trollope lovers. Great review!