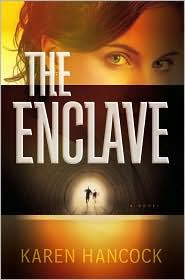 Sometimes books arrive that I don't remember requesting. Such is the case with The Enclave by Karen Hancock. The fault, this time at least, is all mine. This is a blog tour book--apparently I signed up in May for it and forgot all about it! As I said I was surprised when it arrived because it's a genre that I don't really read much in. And there's a reason for that. It's a Christian book. (I don't mind those. That's not where I'm nitpicking.) But it's one of those oh-so-modern-thrillers. In The Enclave it is one of those Evil Institution and Mad Scientists type of thriller.

What is The Enclave about? Who are its stars? We've got two Christian scientists: Lacey McHenry and Cameron Reinhardt. Both are employees at Kendall-Jakes, a research institution under the direction of (the tyrannical and so obviously evil) Parker Swain. The list of 'bad guys' is rather long in this one. But essentially there are plenty of scientists more on the mad side of things who are looking for a way to obtain immortality, to conquer death and the like. One of their schemes includes manipulating genes and human cloning. Employees are encouraged to worship their director and give their all for him. He can be very persuasive. Unfortunately, he can also be very dangerous.

Poor Lacey has quite the time of it. There's a weird "anomalous" creature after her, that is stalking her, who turns murderous when she's transferred out of her department. And then there's the sexual harassment from Swain. She's caught the boss' attention, and he'll stop at nothing to make her one of his girls. He has quite the history, you see. Lacey isn't quite open to all this flirting--she's not stupid exactly--but she's not quite closed to it either. She entertains moments where she thinks he might accidentally be sincere. Moments where she considers that he might be good for her. (Granted, Lacey isn't privilege to all the knowledge readers are. But still, there are moments I wanted to slap her!) Lucky for Lacey, there is Cameron to watch out for her and protect her. Cameron seems to be a bit more aware and open to the idea that his boss is pure evil.

Cameron is prone to having flashbacks. It's written into the story that he has Post Traumatic Stress Disorder. He ever so conveniently flashes back a dozen or so times. I suppose these chaotic interruptions in the text--the shifting from now to then without a second's notice--is authentic enough. These flashbacks overwhelm the narrator without warning, so why should readers be spared the chaos of being flung through time, the disorientation and discomfort of it. Still it can be frustrating to the careless reader. (I'll admit that I'm careless at times. If your mind skips out on a sentence or two, you can get lost very quickly.)

While I didn't particularly "like" this one--just not my genre--I do think some readers might find it worth their time. There is quite the sub-genre for this in Christian fiction. So it must have a steady audience of folks who love suspense-thrillers with a Christian slant.

I don't really love 'Christian' novels either. I do like meaty, complex novels that don't have smut, language, etc. in them so you'd think I'd be the perfect target for Christian, but I don't like being hit over the head with Christianity. I want to identify with a good character who has flaws and tries to make good life choices.

Lengthy comment just to say I probably won't read this book. Thanks for the honest review, Becky.

Hey Im having a contest for a copy of Meridian by Amber Kizer, it would be great if you would check it out...

I also thank you for the review. As an ecclectic reader I often read this type of fiction. Thanks for the info