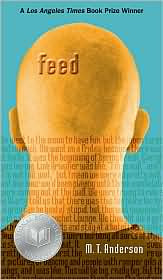 We went to the moon to have fun, but the moon turned out to completely suck.

Feed is both simple and complex; original and unique. Perhaps Titus sums it up best,

"it's about this meg normal guy, who doesn't think about anything until one wacky day, when he meets a dissident with a heart of gold...set against the backdrop of America in its final days, it's the high-spirited story of their love together, it's laugh-out-loud funny, really heartwarming, and a visual feast" (297).

Titus is our narrator and Violet is his love-interest. It all starts during spring break. On the moon. At a club. Titus, Violet, and a handful of other partying teens (mostly Titus' friends and classmates) are 'touched' by an old man. Their feeds--internal feeds--are hacked by this rebel. They broadcast--against their will--a doomsday message:

We enter a time of calamity. Blood on the tarmac. Fingers in the juicer. Towers of air frozen in the lunar wastes. Models dead on the runways, with smiles that can't be undone. Chicken shall rot in the aisles. See the pillars fall. (39)

They are taken into custody. Hospitalized. Examined to make sure that their feeds are fixed before they are fully reactivated. And all seems to be well..at first.

The feeds are responsible for so much. They deliver non-stop entertainment (music, movies, etc), non-stop advertisements and shopping opportunities, and instant connections with the world. Features such as chat and messaging, for example. Of course, with all this built into humanity--right inside the human brain--many things are being lost. Most importantly the ability to think critically, to make observations, to understand and perceive reality.

But as Titus interacts with Violet, he begins to think. And this scares him in a way. Overwhelms him. I'll be honest, Titus isn't always a lovable guy. He can be a real jerk. And Titus and his friends don't keep it clean. (So if 'bad' language offends you, then this is not the book for you.)

I'm not quite sure what to think of Feed. On the one hand, I think it's a smart novel. It challenges readers to think. To perhaps take more of an interest in the world around them. To think about cause and effect. To consider the big picture. Furthermore, it's well-written. Never for a minute do you doubt that this is Titus speaking. That this is Titus's world. The language. The dialogue. The style. Everything helps to establish this world Anderson is creating. But on the other hand, it's a bit of a downer. It's a bit sad, a bit cynical. Did I expect a happy ending? No. Would a happy ending work on this one? Never. I wouldn't think of changing it. This book tells the only story that it can tell.

© Becky Laney of Becky's Book Reviews
Posted by Becky at 11:15 AM

This was a book that I didn't love when I read it a couple of years ago, but I still think about. So, I guess that means it is a really good book.

Jenni @ Falling Off The Shelf said...

I've been meaning to read more of M.T. Anderson's work. I've read one of his novels, Thirsty. It was an interesting read, and I wasn't sure whether I liked that novel or not, but figured I could give more of Anderson's work a chance. I'll have to pick up Feed.

Hi! (I've never commented before but I love your reviews!) I completely agree, Titus is definitely not lovable, but Feed is one of my favorite YA books... so very very strange. I've been meaning to read Octavian Nothing by M.T. Anderson, I hear it's amazing.

I've never been sure what to make of this one ^_^

For me the terrifying brilliance of this book comes from how close to the bone the message is. As I write this my Feed is on: my Tweets send a signal every few seconds, my IPod plays an ending stream of music into my ear, the TV just came on in the other room and serial cereal commercials promise the crunchiest whole grains ever.

IMHO: Anderson isn't as far ahead of his time as Orwell was.

I just recently read my first book by him, the first Octavian Nothing book. I have the sequel here to read and then I think I am going to give this one a try. :)

I read this one about a year ago, and I just could not get over how amazing M T. Anderson is with dialogue. He used a lot of made up words, but they always fit perfectly and gave such a feeling of realism. and the dystopia he describes seems like one that we could definitely be headed towards.

The premiss of this book reminds me Extras by Scott Westerfeld, kind of. I haven't read it but I think I might add it to my preliminary TBR pile.

I read another review that mentioned the book was very interesting and well written as well. I don't know if I need a cynical read right now, as I am still trying to get over the last one, but I might give this a try in the future. Great review!

This is one of the very first books that my husband read "just for fun." We saw Richard Peck speak and he's a huge fan of this book and talked about it's fantastic first line. I haven't even read the book but even without you telling me what the first line was, I could have told you what it was. Hope to catch up with husband and read it one day.

It is hard to take this book seriously because it reads like it is written by a 10 year old. "LIKE O MY GOD"! After reading 14 pages i have had enough, and cannot take anymore of this garbage. Unfortunately i have to read this for a college class even though it insults my intelligence.