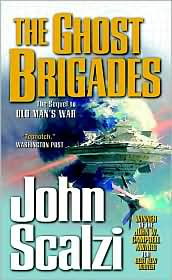 No one noticed the rock.
And for a good reason. The rock was nondescript, one of millions of chunks of rock and ice floating in the parabolic orbit of a long-dead short-period comet, looking just like any chunk of that deceased comet might.

The Ghost Brigades is the sequel to Old Man's War. Our hero is not John Perry--which disappointed me slightly, I admit--but a Special Forces soldier named Jared Dirac. This isn't just any Special Forces soldier. No he's a unique individual. Specifically designed to host the consciousness of Charles Boutin. Who is Charles Boutin? A traitor to the human race, a top-level scientist of the CDF--Colonial Defense Forces. When this man's consciousness is found in a machine, the difficult choice is made to create a body for it--part clone, part special forces 'super' soldier. But when this transfer doesn't go quite like planned, he becomes a seemingly ordinary soldier. With his BrainPal, he joins other soldiers and blends in well. Until. Until the day he decides to try black jellybeans.

A taste of this candy triggers a memory--the memory of his daughter Zoe to be precise--but it doesn't stop there. And this change in him doesn't escape notice. Ordinary soldier, no more. A man not quite trusted, a man to be observed and experimented with. And suddenly there's a fight going on within him. He's still Jared, for now at least, but he also finds Charles to be there--his memories, his feelings. As the weeks and months go by, he learns more, feels more. Can Jared be used to puzzle out the mystery of Charles Boutin's betrayal? Is Jared friend or foe to humanity? Is he fated to turn traitor too?

The only familiar face--at least that I can recall--is Jane Sagan, the friend and love interest of John Perry. She's still a soldier. And she plays an important part in this one. Jared is one of "her" soldiers--he's under her command. She's there to watch him, observe him, and see where Jared's loyalties are.

How does this one compare to Old Man's War? Well, I found it more serious (more detail-oriented as well) and less humorous. I miss Perry's sarcasm and wit. The Ghost Brigades is science fiction, a military-oriented space drama. The plot is advanced considerably in The Ghost Brigades, and the stage is being set for a showdown. So in answer, I liked it well enough. But I didn't love it.

Thanks for the review, Becky! I just recently bought a copy of Old Man's War to try. I'm glad to know that the next book in the series doesn't feature the same protagonist. It's nice to be prepared about some things. :-)

The next book sees the return of John Perry, as he Jane Sagan & Zoe settle on a new planet and thankfully more of the humour is back. My favourite in the series is the last Zoe's Tale.

Thanks for the review, Becky. I've heard good things about this series. It's good to have my memory jogged so I can remember to put it on my list.

I am looking forward to reading this. I just recently splurged and bought it, so hopefully I can get to it soon!

I think that my husband would love both of these books, and as I am always on the lookout for good reading material for him, I will be putting these on the list. Thanks so much for the thoughtful review!