What's On Your Nightstand (July) 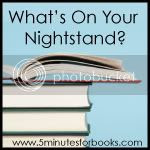 Cleopatra's Daughter by Michelle Moran. This one is still by my bed. (One of many that seems to have taken up permanent residence.) I *want* to read it soon. As this one is going to be published in September, it's going to get my priority in August.

The Navel of the World by PJ Hoover. This one has only been here a few days--less than a week. I hope to finish it soon. This one is the sequel to The Emerald Tablet which I reviewed this past weekend.

Goth Girl Rising by Barry Lyga. This one is the sequel to The Astonishing Adventures of Fanboy and Goth Girl. It will be released in October. You have plenty of time to get to the first book.

Five Children and It by E. Nesbit. I am love, love, loving this one. Why didn't anyone ever tell me how great this book is???

Al Capone Does My Shirts by Gennifer Choldenko. I've been meaning to read this one for ages and ages. Okay, since it was first published in 2004 (isn't that the same thing as ages and ages?) but the upcoming release of a sequel has me wanting to read it NOW.

Tom's Midnight Garden. Another I've been meaning to read for months. This one thanks to Nymeth.

Gone With The Wind by Margaret Mitchell. This one reading for a book club. I'm about ten chapters behind where I'm supposed to be. Oh well. It's not like I haven't read it many, many times.

June Bug by Chris Fabry. This one is supposed to be a retelling of Les Miserables. I'm curious to see if I like it.

The Time Traveler's Wife by Audrey Niffenegger. This one is on loan from my cousin. I've been wanting to read it for a long time. (And it'll count for Herding Cats, I think).

Montana Rose by Mary Connealy. One I haven't started yet. But it is by my bed. It is a blog tour book. (August 17th)

The Frontiersman's Daughter by Laura Frantz. Again, one I haven't started. But it has been living by my bed since it arrived a week or so ago. Again, a blog tour book. (August 26th).

I am expecting Cleopatra's Daughter any day.... it sounds so good!

Currently finishing up Pope Joan - a fantastic read and then need to prep my book tour of Blue Like Play Dough.

I read something recently about Cleopatra's Daughter and have had Nefertit on my stack for ages.

I have Time Traveler's Wife on my "worst books of all time" list, but I seem to be in the minority on that!

You have as many books going as I do. Big difference being, of course, that you will actually finish yours in a timely manner.

"Five Children and It" is lovely, isn't it? - one of my childhood favourites. And then you'll no doubt enjoy the sequels as well. L.

I've got June Bug on my stack to be read. Just finished Montana Rose and enjoyed it.

Oh, I love Five Children and It - I discovered Nesbit after loving Edward Eager's books so much! And Tom's Midnight Garden is just beautiful - Enjoy!

I have The Five Children and It sitting here on my bookshelf too. Sounds like you like it. Just a little. ;)

Loved Al Capone Does My Shirts.

I'm excited to read your review on Cleopatra's daughter, it's a book that I am really looking forward to!!

A remake of Les Miz!!

You've never read Audrey Niffenegger before? I really hope you like it. I consider it one of my favourite books of all time!

I envy you your first read of The Time Traveler's Wife. Such an amazing book. I am looking forward to her new book coming out in a couple of months. It has been a long time coming, and she got a HUGE advance for it, so I hope it lives up to the expectations.

I loved The Time-Traveler's Wife...such a moving book. I am not so certain that I want to view the movie.

I am going to check into the Five Children and It seeing how you love it so. Just placed it into my GoodReads To-read list.

BTW: I read Dragon Slippers based on your review and I really did love this book. It was delightful read so I am going to read the next book in the series. Thanks for reviewing it.