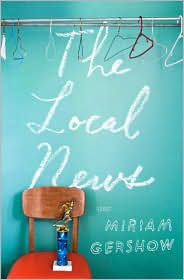 Gershow, Miriam. 2009. The Local News. Spiegel & Grau. 360 pages.
After my brother went missing, my parents let me use their car whenever I wanted, even though I only had a learner's permit.
Lydia Pasternak, our narrator, has a difficult coming-of-age when her brother, Danny, whom she had a difficult and complex relationship with even on the best of days, goes missing and is later discovered dead. It's hard enough being sixteen without the added stress of having a missing brother. It's hard to be invisible at school when her very presence brings forth pity. Almost everyone loved her brother--especially the popular people, the pretty people, if you will. And now they want to reach out to Lydia. So she hangs out with new people. She goes to parties. But where does she belong in all this?
In some ways The Local News is an uneasy novel. I think this is intentional for the most part. Lydia certainly feels uncomfortable in her own skin, in her own life. And it is only natural that that rubs off on the reader. Lydia is uneasy for so many different reasons. She didn't really get along with her brother, hadn't gotten along with him for a while now, and now he is gone. She doesn't have much closure there. He's gone. That's it. They spend the better part of a year investigating the disappearance. When the police investigation isn't moving fast enough for the family, they hire their own private investigator to try to piece together the puzzle. And Lydia throws herself into this investigation, and throws herself at the investigator, Denis. Also her parents are not the same as they were. Her parents are absent--they've divorced themselves from their surviving child. They barely register her existence. And that's tough to take. Who does Lydia have in her life? A jumbled assortment of her former friends and her brother's former friends plus a foreign exchange student. I never felt comfortable with Lydia's friends. At all. Maybe because Lydia herself wasn't sure about them? Maybe because I felt there was too much awkwardness in the whole affair.
The Local News is an adult book narrated mostly by a young adult protagonist. The framework of the book is that Lydia is returning to her hometown ten years later for her reunion. This is bringing back memories of which many are painful and awkward and in-between. There is some distance between the events and the narration of those events.
I had a hard time liking Lydia because I had a hard time connecting with Lydia. I'm not sure why. Perhaps Lydia was emotionally distant and hard-to-get-to-know. If she was purposefully written that way, that would certainly make her authentic to the situation. She's had quite a shock and she's out of sorts.
Perhaps I just couldn't relate to her. She's a world-politics nerd who on the one hand enjoys being intellectual and debating and discussing real news, important news. On one hand, she despises the shallowness and phoniness of the typical high school crowd. There's probably a good reason she only had one friend before her brother disappeared.
But on the other hand, she's enjoying experimenting with the popular crowd, the crowd that loved and adored her older brother. She enjoys going to the parties and getting drunk and flirting with guys she really has no interest in. She likes going with the crowd and not really being true-to-herself. She likes pretending to be someone else maybe because it's easier, requires less thinking. Who knows? I just know I felt uncomfortable spending time with her and her friends. Especially David. He creeped me out. And I'm not sure if he was meant to or not. The ending left me confused. If you've read it, I'd be interested in hearing your thoughts about it.
© Becky Laney of Becky's Book Reviews
Posted by Becky at 6:58 PM

I read it and really enjoyed it, although I do know what you mean about not being entirely comfortable spending time with Lydia and her friends. I don't think Lydia felt entirely comfortable either. She reminded me a lot of the main character in Speak (did you read it?)- hanging around people she didn't have much in common with just to have some kind of connection to someone. David was definitely nerdy but so was she, and he was her only real friend, even as the cheery flag girl tried to force a friendship.

Thanks so much for the insightful review, Becky, and for the time you spent reading and reviewing The Local News. I'm off to read the interview with Miriam now!

I haven't read this book, but I enjoyed your review. I sometimes find a book difficult to fully enjoy if I can't get comfortable with or don't like spending time with the main character. I think your feelings are pretty valid there. I do really appreciate your honest thoughts on this book though. I will have to look at it a little more closely before I decide if I would want to read it.

Wow, Becky, this was a fabulous review! It's evident that this book never let you settle in and enjoy it. And yet your review definitely left me intrigued enough to add it to my wish list.

Hi, I am trying to make a book review blog and it's not very good so I need to know what I should do and how to do it. If you could please leave an advise comment I would appriciate it.