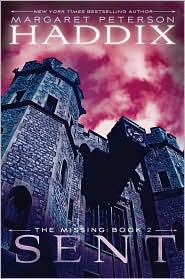 Jonah was falling, tumbling over and over, down and down, through nothingness and absence and void.

Jonah and his sister, Katherine--being true friends--couldn't let Chip go alone. True, they didn't know where he was going exactly, though they had a handle on why, but whatever hardships come their way, they'll face together. Jonah and Chip are both adopted. But their mothers, their birth mothers, didn't come from the twenty-first century or even the twentieth. No, Jonah, Chip, and others like them--like Alex--are children "rescued" by future time travelers. You can read all about this mystery in the first novel in the series...Found.

Who is Chip? Who is Alex? I mean who are they really? These two kids are royalty. Chip being Edward V, and Alex, his younger brother, being Richard, the Duke of York. And now all four children are being sent back in time--by one faction of the future time travelers--to the fourteenth century. Chip and Alex were sent back in time to restore the past to what it should have been, to try to prevent damages to the timeline. But now that Katherine and Chip are part of it, plans have shifted a bit.

How well do you know your history? What do you know about the fourteenth century? If you're like Chip, Alex, Katherine, and Jonah, the answer is not much. What they do know--what soon becomes obvious--is that Chip/Edward and Alex/Richard are in danger. Richard of Gloucester is making a power play for the throne. And if history is destined to repeat itself, then these two may not be long for this world.

What did I like about this one, I mean, besides the time traveling bits? Well, I liked that Margaret Peterson Haddix uses a great historical mystery to tell her own story. What happened to those two boys has always been a mystery. Was Richard III a murderer? Did he hire someone to kill these two boys? If they did die of unnatural causes, how did they die...and when. Where the two skeletons unearthed centuries later really and truly their remains? Where these two smuggled to safely? Did they live out their lives in hiding? Is Richard III a monster like William Shakespeare portrayed him? Is Richard III evil incarnate? Or has history done him a great injustice?

This one offers a little history and mystery which combined with the more science fiction elements of the story make for a compelling read.

© Becky Laney of Becky's Book Reviews
Posted by Becky at 8:21 AM

I hope my library gets this one. I liked the book before it, but not enough to buy it...

Oh, I had no idea the second one was out. I'm so excited. I'm going to head over to my library's website right now and request it. Thanks for the head's up!

What do you mean with the tag MG? Perhaps a FAQ page with a list of tagsÉ