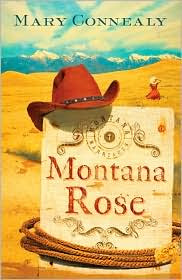 Connealy, Mary. 2009. Montana Rose. Barbour. 318 pages.
I wanted to like this one. But it suffers from the sad condition of having a silly unnecessary villain as a plot device. (Not all readers are bothered by this. Some romance readers actually consider silly a guilty pleasure, something to enjoy.)
What do you need to know about this one? Well, the author was "inspired" by Janette Oke's Love Comes Softly. This made me a bit curious. Love Comes Softly was the first romance I'd ever read. (Well, unless you count These Happy Golden Years by Laura Ingalls Wilder.) And it really doesn't get much better than Marty and Clark. At least for me. Not in this genre of Christian historical romance. How does this one compare? It doesn't. Of course, that's just my opinion.
Cassie Griffin has just buried her husband. But this husband was no gem. (Though it takes a while for Cassie to admit just how awful a husband Griff was to her: physically and emotionally abusive.) Her husband was in debt. And what Cassie needs...and quick...is a husband. The gravedigger, Red Dawson, is the lucky man whose proposal she accepts. (He is not the only man there at the funeral to offer for her. She gets many proposals that day.) He's a good man, a Christian. And he's willing and able to be a father to her unborn child and a good husband to her. He pays off some of her husband's debts--though he can't save any of her things, things her first husband mortgaged, things like her family bible that just happens (oh-so-conveniently) to be a Gutenberg Bible. (A fact that I found more than a little implausible. Since it would have been around four hundred years old, and at the time of the original printing something that only the extraordinarily wealthy could own. Most were owned by monasteries or churches or universities. In other words, not private individuals.)
Cassie and Red are attracted to each other from the start. The only resistance between them coming from Red who doesn't want to rush her, to make her feel that she has to love him. The two do their share of bickering. Cassie doesn't know how to do some of the chores--though she does know how to cook--and working with animals--horses and cows and pigs and chickens--doesn't come naturally or easily for her. But Red is patient--most of the time. And even when he is impatient, he's never cruel or harsh or demeaning or abusive. So he's definitely in the good guy camp.
Insert the superfluous villain, one Wade Sawyer. A young man who for better or worse turns into a drunkard stalker determined to kill Red, though he's a bit of a coward at the killing part, and "rescue" Cassie. He's been stalking Cassie since before her first husband died. He's a creepy guy. (Reminded me of Jud Fry from Oklahoma now that I think about it.) He's got an overactive imagination and that's just the start of his problems. Not that we get to know him well, he's a bit one-dimensional at that.
Readers are also introduced to Belle, an outspoken and slightly-crazy man-hating woman with lots of kids. (She counsels all her daughters to hate men as well.) But Belle being inspired by Cassie decides to be nice to her husband for a change to see if she can inspire her husband to reform. But so far--at least in book one--no such luck. Her husband, Anthony, is one big loser. Perhaps this story line was introduced--these characters were introduced--to prepare for later books in this new series. Since this story only marginally relates to Cassie and Red's romance.
If this story had focused only on Cassie and Red, then I probably would have enjoyed it more. I think there's a chance, you'd like this one more than I did. But I don't care for her self-proclaimed style: "mayhem, disaster, comedy, and gunfire."

© Becky Laney of Becky's Book Reviews
Posted by Becky at 8:26 AM

Came across your blog through CFBA's blog (I'm a new reviewer).

Anyway...I haven't yet read any of Mary's books, but, I'm with you on the Clark and Marty thing - it seems I hold many books up to the Love Comes Softly series...and, most fall short.

I'm enjoying reading through some of your other reviews!