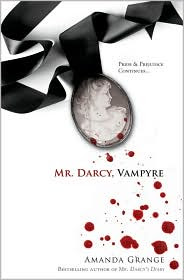 December 1802
My dearest Jane,
My hand is trembling as I write this letter. My nerves are in tatters and I am so altered that I believe you would not recognize me. The past two months have been a nightmarish whirl of strange and disturbing circumstances, and the future...
Jane, I am afraid.
If anything happens to me, remember that I love you and that my spirit will always be with you, though we may never see each other again. The world is a cold and frightening place where nothing is as it seems.
It was all so different a few short months ago. When I awoke on my wedding morning, I thought myself the happiest woman alive...

In this imaginative sequel to Pride and Prejudice, Amanda Grange introduces a new mystery--full of a few twists and turns--to the story as her Mr. Fitzwilliam Darcy is a creature of the night, a vampire. Oh, her Mr. Darcy still loves Elizabeth. (She hasn't committed that sin in her work, have no fear, this Mr. Darcy isn't viewing Elizabeth like a hamburger.) But let's just say Mr. Darcy is having problems showing his love to Elizabeth in the way that she expects...and that readers expect. The novel begins--after a very brief prologue, a flash-forward, if you will--with the two couples (Jane and Bingley, Elizabeth and Darcy) saying 'I do.' After a celebration--a celebration without any major embarrassments from Mrs. Bennet to spice things up, I might add--the two couples go their separate ways. But Darcy has a surprise for his bride. He's changed the destination of their wedding trip without telling anyone. Instead of that trip to the Lake District, they'll be going abroad, going to the Continent, their first destination: France.
From the very beginning, Elizabeth is suspicious of Darcy. He isn't acting happy or pleased. You'd think that he'd be the happiest of men, newly married to a beautiful and intelligent woman. But this Darcy seems preoccupied and moody. Like he's got something BIG bothering him, distracting him. And much to Elizabeth's surprise, Darcy is not interested in consummating their marriage, he avoids any and all intimacies with her. She's beginning to feel ashamed and frustrated. What is his problem? Why isn't she able to capture his attention? Why isn't he interested in her?
As the pair travels Europe--France, the Alps, Italy--they meet many people. Darcy is showing off his bride to his European relations--some mighty strange relations at that, a few that just out and out give Elizabeth the creeps.
What's in store for these newlyweds? Will Darcy ever come clean to Elizabeth? What will she do when she learns the shocking truth? Will she stand by her man even when her man has fangs?
What did I think of Mr. Darcy, Vampyre? I thought it was fun. It was silly in places. The action is of that grinning variety where it's hard to take it completely seriously, but at the same time, you have to keep reading. I couldn't have put this one down for anything. Seriously, I opened it and became so absorbed in it that I lost hours of time without realizing it... and without regretting it. And when you think about it there is no better compliment than that.
© Becky Laney of Becky's Book Reviews
Posted by Becky at 5:22 AM

This just sounds like so much fun. I've been seeing a different cover to it though and I prefer the other one. Cannot wait to read it.

"What did I think of Mr. Darcy, Vampyre? I thought it was fun. It was silly in places. The action is of that grinning variety where it's hard to take it completely seriously, but at the same time, you have to keep reading."

That is what I was expecting and why I can't wait to read this! Great review Becky!

Michelle, this is the U.S. cover. The U.K. Cover has a picture of Mr. Darcy with fangs.

I don't know what to make of this book. It seems like everything else these days - jumping on the vampire bandwagon. But I'm glad you did enjoy it though. :-D

I just finished this book today, and I agree it was fun. So glad Mrs. Bennet wasn't in this one.

--Anna
Diary of an Eccentric

Awesome review! I think I would like this book. It sounds fun and a little silly, which is just what I need right now. Thanks!

Great review! A mix of Jane Austen and vampires is defintitely something I'd like to read!

I really enjoyed this book. I think Grange did a great job. Have you read her Mr. Darcy's Diary? I loved that one too.

can't wait to read this one either; it's on my list as well! Thanks for the review!

I saw this book at a store and was like...what do they think of next?

I agree with Lady Lazarus. Vampire bandwagon! but this book was actually good and was well written, there was actually a storyline to it unlike 'twilight' the book at the front of the bandwagon...

i thought it was really good and hard to put down. But the ending was terrible. it had a rushed feel and the excuse to make it a happy ending was just poor imagination . however other than the last 50 pages it was a good read.