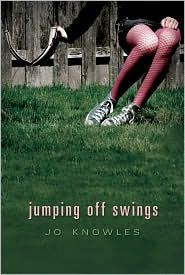 I can still feel a trace of his warm lips against mine as he slips away from me and fumbles for the door to his father's van. I stay lying under the scratchy wool blanket on the backseat, wishing he'd stay. When he slides the door open, the ceiling light blinks on and exposes our faces to each other. His hair is rumpled. His brown eyes avoid mine.
"Thanks, Ellie. See you inside?"
I nod.
He slides the door shut and leaves me in the dark.
Thanks, Ellie.
I sit up and reach under my shirt to reclasp my bra as his shadow makes its way across the lawn and back to the house.
He doesn't turn around.

Ellie has a bit of a reputation. She'll have sex with anyone, so they say. Which is why Josh seeks her out at a party, takes her to his father's van. But what no one planned for, no one expected, was that nine months later, Ellie would be delivering a baby boy. The novel is segmented into four parts: September, December, March, and June. We get the story--the real story--from four different narrators.

Life can be complicated. And it shows in Jo Knowles' Jumping Off Swings, a teen novel about how one pregnancy can effect four lives: Ellie, Caleb, Corinne, Josh.

Ellie, the mother-to-be, is anything but happy with her life, with her choices. In fact, at one point, she made the decision to have an abortion. But--and without any outside pressure--she decided to have her baby, to choose adoption. Ellie seeks love in all the wrong places, in all the wrong ways. She's hurting and wanting to find love, to find comfort. But what she usually ends up finding is more pain, more confusion, more emptiness.

Caleb and Corrine are two of her best friends. They've been her best friends for years. Caleb has always crushed on Ellie, but with these changes, could it be that his love has turned, he's seeing Corinne in a whole new light, but is it wrong for these two to find love, to find each other when their friend is going through so much?

Josh, the father-to-be, is confused as well. He was tired of being teased about being a virgin. He was tired of being the only one of his friends not having sex. But his brief experience with Ellie wasn't what he was expecting, it was a bit of a disappointment actually. With his friends, he talks big, but is there a sensitive kid, a good kid, in there somewhere? Caleb thinks so. Caleb sees that Josh is different depending on who he is hanging out with. Who is the real Josh? And how will this experience change him?

Multiple narrators can be a bit tricky at times. Not every author can pull it off well. That's because each narrator requires so much work, so much substance. Narrators need to be complex, authentic, fleshed-out individuals. I thought Knowles did a great job with each narrator.

I really want to read this book! I like books with multiple narrators and I've been looking forward to this one.

Natasha, I'd be curious to see what you think of this one. I know you had some definite opinions on I Know It's Over.

This looks really interesting. Definitely one I want to read. Sounds like Juno without all the clever quips.