Al Capone Does My Shirts (MG, YA) 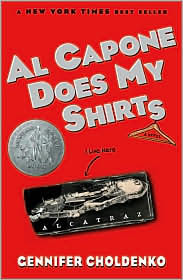 Today I moved to a twelve-acre rock covered with cement, topped with bird turd and surrounded by water. Alcatraz sits smack in the middle of the bay--so close to the city of San Francisco, I can hear them call the score on a baseball game on Marina Green. Okay, not that close. But still.

Our narrator, Matthew "Moose" Flanagan, is having a hard time adjusting to the recent move. His father, an electrician and part-time prison guard, and mother, a part-time piano teacher, decided that this was what was best for the family. More specifically, what was best for Natalie. Moose has an older sister that is younger than him. She's been celebrating her tenth birthday for almost six years. At some point, his parents decided--make that his mother--that life would be easier if they all played a game of make-believe. If Natalie stayed ten, then hope remained alive.

Natalie is different. But at the time this story takes place, in 1935, the word autism wasn't around. No one knew what made some children disconnect from the world, become obsessed with something or other, to lose themselves. For Natalie it is counting. She's good with numbers, with math. And along with eating lemon cake, counting and sorting her buttons is her favorite thing.

They're hoping that Natalie will be accepted into the Esther P. Marinoff School. While this would mean the separation from the family--she'd live at the school--there have been some success stories of children learning how to function, how to interact. But there's an age limit. And she is way past it.

Meanwhile, Moose spends all of his time (outside of school at least) with his sister. Not necessarily by choice. (If it was up to him, he'd be spending time with kids his own age playing baseball.) But he's the delegated sitter. There to protect his big sister. But more than that. He's there to encourage her and support her. When Natalie starts making some progress, he's there for her.

This one is both serious and humorous. A nice blend of the two. Yes, Natalie's autism is serious. It keeps Moose's mom stressed and depressed. But it's a funny novel as well. It's got it's lighter moments. Moments where it's about baseball, tricks and schemes, etc.

© Becky Laney of Becky's Book Reviews
Posted by Becky at 9:09 AM

I loved this book...can't wait for the sequel!

I enjoyed this book a lot. The sequel, coming out next month, I think, is even better.

I had no idea what this book was about before reading your review, although I had heard the title mentioned all over the place. It sounds like it is a very touching and involving read, and like something I would like very much. Great review!