Nay, but this dotage of our general's
O'erflows the measure: those his goodly eyes,
That o'er the files and musters of the war
Have glow'd like plated Mars, now bend, now turn,
The office and devotion of their view
Upon a tawny front: his captain's heart,
Which in the scuffles of great fights hath burst
The buckles on his breast, reneges all temper,
And is become the bellows and the fan
To cool a gipsy's lust.

Antony and Cleopatra is a tragedy. One of those Shakespeare plays that end with a massive heap of bodies. Personally--each to their own and all--I'm not all that into Shakespeare's tragedies. Even those tragedies that are reportedly tragic love stories. I suppose they're human enough stories--tales of men and women with natural flaws and the unfortunate circumstances that ultimately lead to hopelessness, despair, and death for those involved.

Cleopatra and Antony are lovers doomed for a tragic end. And they are to blame in part--as most 'tragic lovers' are, I suppose. Antony loves Cleopatra well enough in his own way. But he also loves himself, his sense of duty to his country, his glorious political and military career. He likes to be thought well of. He likes being a Roman hero, a political somebody. Cleopatra, likewise, is a political somebody. She understands--in a way--because she definitely has her own sense of love and duty for her country, for Egypt. Both lovers have big egos and the personalities and temperaments that go along with them. I would classify both as high-maintenance; neither would be easy to live with. (Personally, even without outside influences l think these two could not have had their happily ever after.) The problem with these two is a sense of imbalance. Each have two selves: the public persona and the private individual. So their love affair bleeds through into both. Their relationship has just as much to do with politics and power and authority and military majesty as it does the bedroom. 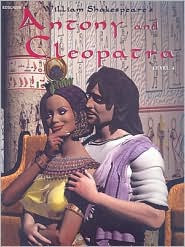 So who is Cleopatra? Is she "cunning past man's thought" or "a wonderful piece of work"? Who is Mark Antony? Is he "a man who is the abstract of all faults"? Does she bring out the best or the worst in Mark Antony? For that matter, does he bring out the best or worst in her? Is their affair one based on love or lust. Oh, I'm not denying that there is plenty of lust to go around. Their relationship is a passionate one. But does it go beyond that? How true is their love? How solid is it? Does their 'love' for one another make them weak or strong? Is Cleopatra right to mistrust Antony? Is she right to believe the old saying, once a cheater always a cheater. If he really, truly loves Cleopatra why is it so easy for him to agree to marry someone else?

What did I think of this one? Well, I liked parts of it. There were some lines that were just beautiful. Lines like, "the bright day is done, and we are for the dark" and "eternity was in our lips and eyes." But did I like the characters? Not really. Cleopatra was manipulative--that is when she wasn't being a nag. Did she have every reason in the world to be jealous and suspicious? Sure. I think she had more than a little reason. What with him having been married when their relationship began. And then after his first wife died, having him choose to marry another woman instead of her. Anytime he is away from her, she's suspicious. She always thinks the worst. If it weren't so tragic, it would be funny. The way she carries on. Antony was just stupid. I'm sorry, that's the way I see it. He chose not to think with his brains. And that's all I have to say about that. If I had to pick a favorite character it would be Enobarbus.

Have you read this one? Did you think it was romantic? Did you like Antony and Cleopatra as a couple?

This is one I read for Liv's Shakespearean Summer challenge.

I love this play! However, I love Shakespeare and his contemporaries, and the tragedies are my favorites. I really appreciate Cleopatra's character because so many of Shakespeare's females are weak (and the ones that aren't end up dead or "tamed"). It also helps that I enjoy keeping plays in their historical context. This work, like The Taming of the Shrew, is probably more difficult to digest in a modern setting, where our values have changed so much. In the midst of my Shakespeare courses, I don't think twice about Antony's quick agreement to marry Octavia. Homosocial bonding was quite common in the Renaissance. I am also interested in the masculinity of Cleopatra, made even more intriguing considering she was played by a male when it first came out. Also, her jealous relationship with Antony is likely connected to the truth as well as gossip about Elizabeth I's relationship with Robert Dudley. Finally, I agree with you about their public and private spheres; they cannot reconcile them because rarely are women in the public sphere at the time. Good review!! I really enjoyed reading it!

I've always wanted to read this. I love Shakespeare's tragedies much more than his comedies.

I haven't read this play in ages, but I remember thinking that the public/political life often interfered with the personal lives of these characters.

But more tragic than the circumstances of the outside world is there love, itself. The mistrust inherent in it and how they act toward one another and away from one another. disappointing to say the least.

This is not one of my favorites.