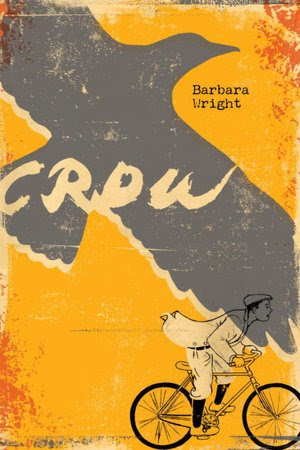 The buzzard knew. He gave the first warning. I was playing in the backyard while my grandmother stirred the iron wash pot over the fire. She had gray hair and a bent back. Standing, she looked like the left-hand side of a Y. If she'd been able to straighten her back, she would have been taller than me, but since she couldn't, we were the same height. I called her Boo Nanny. She joked that I should call her Bent Granny.

Set in 1898 in Wilmington, North Carolina, Crow is a dramatic story of the events leading up to Wilmington Massacre of 1898. (Had you heard of it before? I sure hadn't.) It is narrated by an eleven year old boy, Moses Thomas. He is close to his family--especially his grandmother, Boo Nanny, and his father, whom he admires. (His father is one of four black aldermen in Wilmington; there are ten aldermen all together. His father also works for the Wilmington Daily Record, "the only Negro daily in the South.") Family dynamics feature prominently in this novel. The Thomas family is not presented as perfect--far from it--the tensions between family members, especially between the father and Boo Nanny (his mother-in-law) are fierce. But never for a second, did I doubt how strong and resilient and loving this family could be. Their kindness for one another, their concern for one another, their joy of being together, well, it was something I loved seeing.

So Crow is a novel about race relations, racial tensions between the black and white communities in Wilmington, North Carolina. It is about MORE than that. It is a novel with depth, substance. It is a meaning-of-life kind of novel, I thought. But the subject matter can't be ignored.

One of the big issues of the book is how the editor of the Wilmington Daily Record wrote an editorial in response to something he'd read. A woman who was calling for action, encouraging men to lynch those blacks who dared (or allegedly dared) to be "too forward" with white women. He dared to look at the other side of the issue. What about those white men who forced themselves on black women? What about all the slave owners who became involved with their slaves--with or without consent. What about all the white men that fathered children with their slaves? If interracial involvement was wrong, immoral, dangerous, something to be avoided at any and all costs, shouldn't it work both ways? Much more about this can be found on this website, 1898 Wilmington Debunking the Myths. His editorial made him no friends--only enemies on both sides. For his editorial made the white community angry and aggressive and ready to attack. And the black community did not want to fight this battle--did not want to be the target.

Of course, that isn't the only factor in the novel. It isn't that simple. It's also about Republicans and Democrats. The constitution. The right to vote in elections. It's about justice and equality. Or should that be injustice and inequality? Crow is set during an election year, and politics is VERY important.

Crow isn't just an issue book though. I know it may sound like an "important" book, an "issue" book. But it's also a good book if you're looking for a compelling story with a strong narrative. If you enjoy coming of age stories. If you can appreciate good writing, good characterization, then you'll find something special in Crow.

"There is not one Constitution for white folks and a separate one for black folks. There is one Constitution for all Americans, no matter what the color of their skin, and it promises us the right to vote. This is what we are guaranteed, and we will settle for nothing less." (220)