The Stars My Destination 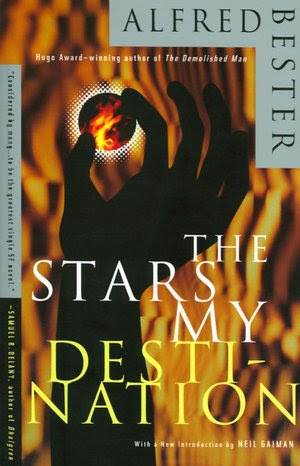 The Stars My Destination. Alfred Bester. 1956. My edition, published in 1996, has an introduction by Neil Gaiman. Knopf Doubleday. 272 pages.

This was a Golden Age, a time of high adventure, rich living, and hard dying...but nobody thought so. This was a future of fortune and theft, pillage and rapine, culture and vice...but nobody admitted it. This was an age of extremes, a fascinating century of freaks...but nobody loved it. All of the habitable worlds of the solar system were occupied. Three planets and eight satellites and eleven million million people swarmed in one of the most exciting ages ever known, yet minds still yearned for other times, as always. The solar system seethed with activity...fighting, feeding, and breeding, learning the new technologies that spewed forth almost before the old had been mastered, girding itself for the first exploration of the far stars in deep space; but--

The Stars My Destination begs the question how far would you be willing to go for revenge?! The narrator of The Stars My Destination is Gully Foyle. He was the sole survivor of a horrible accident in space. He's trapped in a small compartment of the spaceship for days, weeks, months. When he catches a glimpse of another ship, when he dares to try to catch their attention, he sees that ship purposefully pass him by. He sees a ship that could help him, could save him, willfully leave him there...something in him snaps. His whole life becomes about revenge, about tracking down the men and women on that ship, of learning who gave the order to not help him, of learning everything he can about its crew, its mission. He has to know WHO is to blame, he wants to know WHY they did what they did. So Gully Foyle is a man on a mission, he desperately wants answers.

Gully Foyle isn't exactly a nice guy, a comfortable-to-be-around narrator. His actions are more than a little questionable, ethically speaking. Which makes sense, in a way. Because others haven't treated him all that well either. And there are definitely more than a handful of guys in this novel that are out to get him as much as he's out to get them. So it's mutual--this chasing, this hating, this struggle.

One of the interesting aspects of this science fiction novel was the idea of teleportation. In Demolished Man the focus was on telepathy, on how being able to read people's minds could shape a society, could change the rules up. In The Stars My Destination the idea is about teleporting--the ability to jaunte, to move yourself--by forceful thinking--from one place to another. Some can jaunte fifty miles, others can jaunte a thousand miles. But it's something that is being taught to almost everyone. And this is reshaping society, changing the rules, upsetting things. Not for better or worse exactly. Just making things differently. One of things Bester mentions, for example, is how this effects the social classes. First, the rich cling to their superiority by choosing not to jaunte. The wealthier a person is, the slower their mode of transportation. A truly wealthy person might choose to travel by horse and buggy. Second, this effects security. You don't necessarily want just anyone teleporting themselves into your house or office. Third, and I'm not quite sure why this is, it effects women's place in society. Dramatically. Men lock their women away in doorless, windowless rooms--rooms that only they know how to jaunte to--whether this is to "protect" women from intruders or because they want to have ultimate control over them is debatable.

The Stars My Destination is an intriguing novel. And I am glad I read it. But I didn't exactly feel a personal connection with it.

Read The Stars My Destination

How do you read so many books? I read a book a day, but you read like 3!

I will have to try this at some point...