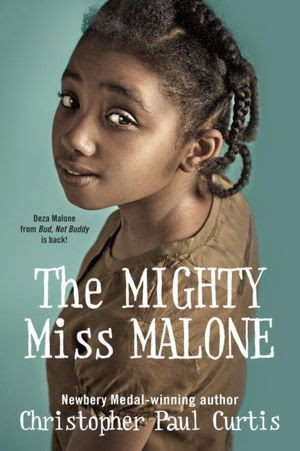 "Once upon a time...."
If I could get away with it, that's how I'd begin every essay I write.
Those are the four best words to use when you start telling about yourself because anything that begins that way always, always finishes with another four words, "...they lived happily everafter."
And that's a good ending for any story.

The first chapter introduces readers to the Malone family. Deza takes great care in showcasing her family's strengths. She praises her brother's singing voice, noting how his singing wows just about everyone. And how his gift makes up for some of his faults. She also praises her mom--who works as a maid--and her father. The chapter also shows readers just how well Deza thinks of herself. She WANTS to be a writer so badly, she tries SO HARD to better herself, to learn as much as she can, but sometimes she tries a little too hard. Sometimes she just needs to be herself. As her teacher--who is retiring--tells her. She thinks Deza has great potential. That she could really do so much if she holds onto her dream. But she doesn't lie to Deza either, there will be tough times ahead.

As I mentioned, this novel is set during the Depression. And readers follow Deza on a tough, tough journey. The difficulties begin when her father and his friends go missing from their fishing trip. Days pass. No word. Bodies are found--but not his. And then--a miracle--of sorts. He's returned to them. Broken, bruised, changed in oh-so-many-ways, but alive. But his road to recovery won't be an easy one. And it may separate him--physically and emotionally--from those he loves best...

The Mighty Miss Malone is a bittersweet novel. It's a hope-filled novel, in my opinion. BUT. It is a novel that makes your heart ache. It just does. Some of the things that happen to the Malone family, well, they're crushing. But the Malones are resilient. And love and kisses and hope do seem to make a difference. I think the novel is very realistic and very well-written.

I would definitely recommend this one.

I have seen this a couple places and they all seem to be positive reviews. Will have to look into it myself.