Sunday Salon: Watching In Name Only 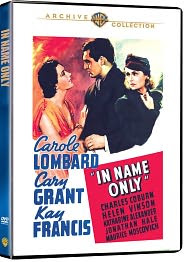 Cary Grant plays Alec Walker a man trapped in an oh-so-loveless marriage. Before meeting the actual woman of his dreams, a Miss Julie Eden, a widow with a young daughter, he is quite happy to just flirt, flirt, flirt and ignore his wife, Maida. But when he falls in love--deeply in love with another woman, a pure(r) woman, he tells his wife he wants a divorce so he can remarry.

What can I say about Maida?! What can I really say?! If I said she was mean and cruel and hateful, would you believe me? Would it matter?! She is mean, cruel, a bully. You could almost imagine her being manipulative even when she's sleeping because essentially that is all she knows how to do. It's not easy to sympathize with a woman who doesn't show any signs of having a heart. BUT. At the same time, morally speaking, does it matter? Does his wife being truly, truly awful justify him falling in love with another woman?

Julie Eden didn't leap into Alec's arms. Even after he told her he was getting a divorce so he could be with her. But. The thought of living life without him proved too difficult. So she does agree to marry him...once his divorce becomes finalized. But when will the divorce come through?!

I have two favorite scenes. One in which Cary Grant goes to get the girl--goes to propose--and he's the "census man."


Alec: Evening, Miss Eden.
Julie: Alec, what are you doing here?
Alec: I am the census man. I have to find out a few things. May I come in? Thank you.
Julie: Alec, I told you not to come.
Alec: I've got to take the census. Now, how long have you lived in New York? One day? How many females in the family? Three? That's wonderful. How many males? None? That's bad. Have to do something about that. Hmm. Now look can you cook? can you bake? can you take care of a man in a style that he's not been accustomed to? I have to know that before I can give you the license...
Julie: What?
Alec: The license. No, not the dog license. The other kind.
Julie: Alec, will you please...
Alec: And by the way will you marry me?
Julie: I can't.
Alec: Oh, come on Julie, that's all changed...Maida's agreed to a divorce so you and I can get married. And I can move in here and watch you work your fingers to the bone for me.

The second scene is when he takes her to look at a house he's just purchased for them...

Watch In Name Only

I adore Cary Grant, and I can't believe I haven't watched this movie! I watch a lot of old movies on TCM but somehow I've missed this one. Off to see about getting my hands on a copy. Thanks for the great review!

I like Cary Grant's Movies..He is very handsome and One of my favorite actors.Thanks for the post :)

This sounds really good. I haven't seen a Cary Grant movie in years.