His Name Was Raoul Wallenberg 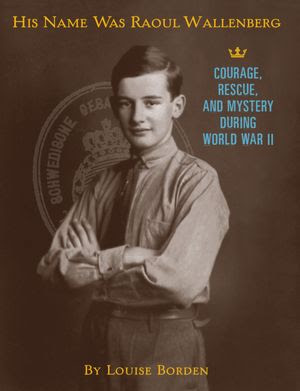 Look closely
at this faded school picture from Sweden.
Find the student whose number is 19
and match 19 to his signature.
Read it aloud. Let it echo.
Raoul Wallenberg.
It's a name for the world to remember.
Now you,
and others,
can become the storytellers
of this boy's remarkable life...

Read. This. Book. It is just amazing, powerful, compelling, and all sorts of wonderful! It is a nonfiction book written in verse. The verse makes it read very quickly. And the verse helps the story resonate even more, in my opinion. Though to be honest, prose or verse, I'd be caring about this story anyway. Yes, I do have a special interest in almost anything connected to World War II. But I think this story isn't just for those that already care, that are already fascinated by the subject. I think this is a book that can bring awareness or new awareness to the subject.

This book was very fascinating, very emotional. The heart of this one focuses on his time in Hungary during the end of World War II. He was a Swedish diplomat sent to Nazi-occupied Hungary to help as many Jewish people as he could. He issued special schutzpasses. What is a schutzpasse? Well, it was an "official" or official-looking document that promised Swedish protection to the person(s) listed. And at least for a time--it worked. It was saving lives. It was making a difference. Of course this project took the work of many, many individuals. But Raoul Wallenberg was the leader, the one who made it all work. As the end of the war drew nearer, as the government changed, as the threat of Communists increased, much did change and would continue to change as the Communists did indeed liberate Budapest. But with the Communists came the mystery...

I'd definitely recommend this one!

Read His Name Was Raoul Wallenberg

I read this book yesterday. It provided a fascinating insight into life during WW2.

It sounds very interesting and I am intrigued by the verse idea.

Again, thanks for including your review on the European Reading Challenge! You've now read 4 of your 5. The Grand Prize goes to the person who reads the most.