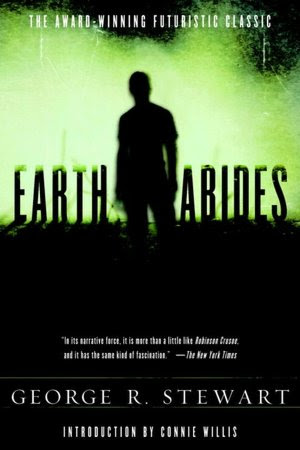 Just as he pulled himself up to the rock ledge, he heard a sudden rattle, and felt a prick of fangs.

Earth Abides almost leaves me speechless. I almost don't know what I could say about this one. I am definitely glad I read it.

Did I find it thrilling and compelling and wonderful? Sometimes. Maybe not as thrilling as you might expect a futuristic apocalyptic novel to be. Think more along the lines of Robinson Crusoe. Slow and steady with some adventuresome scenes. But mainly a more thoughtful novel.

Ish Williams, our hero, was bitten by a rattle snake. He makes it to his cabin before the sickness completely overwhelms him, and he does what he can to try to survive the snake bite. But nothing is certain, and he knows it. What he didn't expect, what he couldn't possibly have imagined, is that while he's been off camping, off having his nature-inspired adventures, his own brush with death via snake bite, the whole world has changed. The earth's population has dropped to almost nothing. In fact, it takes Ish a couple of chapters, at least, to find another survivor. And several more chapters to find a survivor sober enough, rational enough to want to spend any amount of time with. But Ish is determined and intellectual, a real thinker. He will find some way to go on with life, find some way to build a little pocket of society again.

The novel is broken into several sections. Some sections cover a few months, a few years, and other sections cover twenty or thirty years. Some sections are very detailed, very focused on individuals, others not so much. Some characters are definitely developed well, others not so much. Ish is definitely one of the most developed characters, most introspective and reflective characters that I've encountered in science fiction. (Perhaps not more than Ender or Andrew Wiggin in his Speaker of the Dead status.) That doesn't mean I love him necessarily, but it may mean I remember him.

Earth Abides isn't as emotional as it might have been or could have been. Ish just isn't a show-your-emotions type of guy. He is reflective and intellectual. He's resourceful. He knows a little bit about everything. He's a handy guy to have around. But he's not going to go on and on and on about his feelings. He's not going to weep or go crazy. He's not going to lose it just because the world as he knows it has ended. He's disconnected, in a way, yet his detachment may enable him to survive in this new world.

I'm so excited to see someone reading this book! I realize it didn't blow you away, but it's an absolute classic in terms of post-apocalyptic fiction.

I actually read this one in graduate school, in preparation for my comprehensive exams. My emphasis was in Eschatology in American Literature, and this one was a must for the reading timeline!

I read this one last year. While I can't say I enjoyed it (Ish irritated me), I found the subject interesting.

I read this soon after reading Canticle for Leibowitz (where Catholic priests are the guardians of written language after a world holocaust)and found Ish's lack of concern for books and higher learning rather disturbing in comparison. "Just enough learning to survive" seemed to be the motto in Earth Abides.