Enchantress from the Stars (MG) 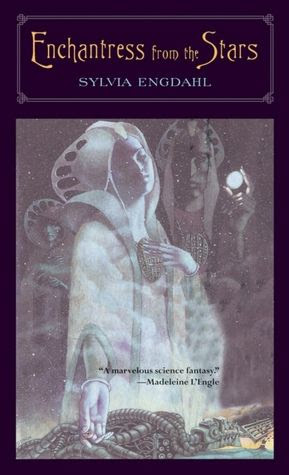 From the prologue: The planet shines below us, cloud-flecked, dazzling against the dark backdrop of space. Down there it is cool and green and peaceful. In a little while we will take the ship out of orbit and leave this world behind, a mere speck in the vast currents of the universe. This world, which we call Andrecia--the third planet of a quite ordinary yellow sun...but that's just coincidence, of course. What difference does it make that just such a planet was my own people's ancestral home?

From chapter one: At the edge of the Enchanted Forest there lived a poor woodcutter who had four sons, the youngest of whom was named Georyn. They were able to earn a meager living by selling wood to the folk of the village, and although there was seldom more than dry bread or thin gruel on their table, they were not miserable.

Oh, how I LOVED Enchantress from the Stars. It was one of those oh-so-magical-practically-perfect-in-every-way books for me. I know not every reader will feel the same connection, the same adoration for this as I do. But. It's one of those books that I could just gush on and on about!!!

What did I love about this one? Everything! I loved the premise. Just loved it! I loved the world-building, the setting, the atmosphere. I loved the storytelling. I loved the characterization!!! I loved Elana. I loved Georyn. I loved Jarel. I even cared a great deal about the Starwatcher and Evrek. I thought this book was just so well written.

Enchantress from the Stars is narrated, primarily, by a young woman named Elana. The novel is reflective, in a way, because the novel is an account of her first 'adventure' on another planet. She's writing her report, giving her side of the story. But this novel is more than just her side of the story. It ventures to include the perspectives of two others--a young man, the woodcutter's youngest son, Georyn, and a young medical officer named Jarel. Both Georyn and Jarel are from Youngling cultures. Georyn is a native to Andrecia; Jarel is from another planet, a planet in a different stage than Georyn's, but a great deal less advanced than Elana's. (He is with the Imperial Exploration Corps). Jarel is just one of many in the first ship sent to "colonize" this planet.

Elana is on a ship with several other agents--including her father--when they learn that Andrecia is being invaded, and a Youngling culture/civilization is being threatened. They can't directly intervene. And they definitely can't reveal themselves. But they can try to influence things subtly, indirectly. Elana is chosen--with some reluctance--to interact with the natives. Well, she's to interact with two brothers--Terwyn and Georyn. These two are on a quest--along with their older brothers--to KILL A DRAGON. Yes, they are on their way to get the king's blessing, the king's permission to enter the Enchanted Forest. They don't know what dangers they'll face, but they know the fiery dragon must be stopped. These brothers see Elana an an enchantress, a faery perhaps. They see her as having great power, great wisdom, great magic.

Enchantress from the Stars won a Newbery Honor in 1971.

Read Enchantress from the Stars

This is one of the few YA books I actually read as a kid. And you're right: it's a wonderful book.

Bummer! you actually had me wanting this one and I don't like to read sci fi!... I went to amazon and saw it's only in paperback and the size of it would be too small for me.. paperbacks have to be 8 inches for me to try to read them... bummer!!!!! great review, obviously since I think I would have read it if it were a larger pb...

Yes, Becky, this one was a favorite of mine, too. Fantasy and science fiction put together with some romance thrown in.

I agree--I just madly love this book! The characters, the writing, and the wonderful mix of sci fi and fantasy.