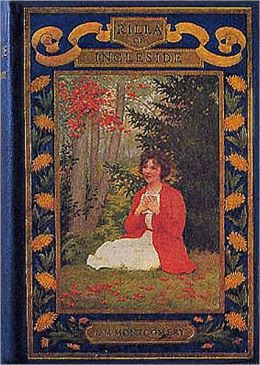 Characters carried over from Rainbow Valley:

Anne and Gilbert have a fine family together: Jem, Walter, Nan and Di (twin sisters), Shirley (a boy), and Rilla. Helping them out around the house (and kitchen) Susan Baker.

Rilla of Ingleside is one of the BEST books I've ever read set during World War I. It is bittersweet and heartbreaking and WONDERFUL from cover to cover. You might think that since it is part of the Anne series that it would be narrated by Anne, or closely follow Anne, but, that is not the case at all. This is Rilla's coming-of-age story. It is HER story from cover to cover, and while her mom is important to her, this isn't Anne's story to tell.

When readers first meet Rilla she is just fourteen. She wants to be considered all grown up, but, in most ways she's still a "silly" girl with big dreams and fancies. (Always laughing, never serious, wanting dozens of beaus, wanting to have a great romance). But her life changes one August evening when war is declared. Jem and Jerry are the first men in her life to go away to war. Eventually she'll have to say goodbye to others: Walter, Ken Ford (the man who makes her lisp out of pure joy), Shirley and Carl. One might expect her to pick up new responsibilities during the war, such as working for the Red Cross or junior Red Cross, etc. But Rilla has an adventure all her own...

For just weeks into the war, Rilla happens upon a tragic scene. She is going visiting or collecting, and discovers a newly dead woman with a newborn son! She brings him home with her even though she doesn't like babies at all. And her father tells her that the baby probably wouldn't survive in an orphan asylum, and, if she wants to keep it at Ingleside, she'll have to be its primary caregiver. Can a young teen girl who previously gloried in new hats, new shoes, and dancing become a responsible parent? Rilla is determined and resourceful!

The book is about waiting, hoping, and praying... Men and women who desperately want their loved ones to be safe, but, who also believe wholeheartedly in the cause...that some things are worth fighting for and protecting. The book chronicles the entire war.

The scene that changes everything:


"England declared war on Germany today," said Jack Elliott slowly. "The news came by wire just as I left town."
"God help us," whispered Gertrude Oliver under her breath. "My dream–my dream! The first wave has broken." She looked at Allan Daly and tried to smile.
"Is this Armageddon?" she asked.
"I am afraid so," he said gravely.
A chorus of exclamations had arisen round them–light surprise and idle interest for the most part. Few there realized the import of the message–fewer still realized that it meant anything to them. Before long the dancing was on again and the hum of pleasure was as loud as ever. Gertrude and Allan Daly talked the news over in low, troubled tones. Walter Blythe had turned pale and left the room. Outside he met Jem, hurrying up the rock steps.
"Have you heard the news, Jem?"
"Yes. The Piper has come. Hurrah! I knew England wouldn't leave France in the lurch. I've been trying to get Captain Josiah to hoist the flag but he says it isn't the proper caper till sunrise. Jack says they'll be calling for volunteers tomorrow."
"What a fuss to make over nothing," said Mary Vance disdainfully as Jem dashed off. She was sitting out with Miller Douglas on a lobster–trap which was not only an unromantic but an uncomfortable seat. But Mary and Miller were both supremely happy on it. Miller Douglas was a big, strapping, uncouth lad, who thought Mary Vance's tongue uncommonly gifted and Mary Vance's white eyes stars of the first magnitude; and neither of them had the least inkling why Jem Blythe wanted to hoist the lighthouse flag. "What does it matter if there's going to be a war over there in Europe? I'm sure it doesn't concern us."
Walter looked at her and had one of his odd visitations of prophecy.
"Before this war is over," he said–or something said through his lips–"every man and woman and child in Canada will feel it–you, Mary, will feel it–feel it to your heart's core. You will weep tears of blood over it. The Piper has come–and he will pipe until every corner of the world has heard his awful and irresistible music. It will be years before the dance of death is over–years, Mary. And in those years millions of hearts will break."
"Fancy now!" said Mary who always said that when she couldn't think of anything else to say. She didn't know what Walter meant but she felt uncomfortable. Walter Blythe was always saying odd things.
"Aren't you painting it rather strong, Walter?" asked Harvey Crawford, coming up just then. "This war won't last for years–it'll be over in a month or two. England will just wipe Germany off the map in no time."
"Do you think a war for which Germany has been preparing for twenty years will be over in a few weeks?" said Walter passionately. "This isn't a paltry struggle in a Balkan corner, Harvey. It is a death grapple. Germany comes to conquer or to die. And do you know what will happen if she conquers? Canada will be a German colony."
"Well, I guess a few things will happen before that," said Harvey shrugging his shoulders. "The British navy would have to be licked for one; and for another, Miller here, now, and I, we'd raise a dust, wouldn't we, Miller? No Germans need apply for this old country, eh?"
Harvey ran down the steps laughing.
"I declare, I think all you boys talk the craziest stuff," said Mary Vance in disgust. She got up and dragged Miller off to the rock-shore. It didn't happen often that they had a chance for a talk together; Mary was determined that this one shouldn't be spoiled by Walter Blythe's silly blather about Pipers and Germans and such like absurd things. They left Walter standing alone on the rock steps, looking out over the beauty of Four Winds with brooding eyes that saw it not.

Since I read this one specifically for the War Through the Generations challenge, I thought I'd share a few quotes about the war:


“Our sacrifice is greater than his," cried Rilla passionately. "Our boys give only themselves. We give them.”

“Nobody whom this war has touched will ever be happy again in quite the same way. But it will be a better happiness, I think, little sister - a happiness we've earned.”

“Without shedding of blood there is no anything… Everything, it seems to me, has to be purchased by self-sacrifice. Our race has marked every step of its painful ascent with blood. And now torrents of it must flow again… I don’t think the war has been sent as a punishment for sin. I think it is the price humanity must pay for some blessing - some advance great enough to be worth the price which we may not live to see but which our children’s children will inherit.”

I used to reread the whole Anne series every winter break. Maybe I'll need to read this one after we decide the Cybils shortlist, just to calm me down. We must be "kindred spirits", Becky-- I love all the books and movies you post!

I read this one for the first time this year and I just loved it! It's now tied with the first book for my favorite of the series.