I recently watched Miracle on 34th Street, Christmas in Connecticut, and Shop Around the Corner.

I really love Miracle on 34th Street (1947), I love how it gives viewers both Thanksgiving and Christmas. I love watching Doris and Susan change throughout the film, how they both come to "believe." I love the romance of Doris Walker and Fred Gailey, I thought it was very sweet and lovely. And I just love Kris Kringle, of course. His time on trial is one of the highlights of the film. Love to see all the letters to Santa come into the courtroom! And the ending of this one is just right!!!

Christmas in Connecticut (1945) is a film I've seen only twice. It's classic romantic comedy. Secrets, everybody has secrets in this film! Elizabeth Lane, the heroine, writes a housekeeping column where she shares tips on cooking, keeping house, raising children, etc. Her secret? She's single, living in an apartment--her column boasts that she lives on a farm in Connecticut--and she can't even cook. Her boss wants her to invite a war hero to the farm to spend the holidays with her. She has every intention in the world of saying no. But she ends up inviting her boss too. What's a girl to do? Where can she find a husband, a baby, a farm on such short notice?! She does have someone who has been extremely eager to marry her even knowing that she doesn't love him at all. But what about the other details? Her would-be-husband, Mr. Sloane, is a man who prides himself on all the details, but does she trust him enough? How will she ever convince anyone that she knows what she's doing?!

It is a romance, but an odd romance with dozens of secrets. 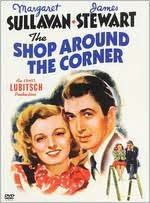 Shop Around the Corner (1940) stars Margaret Sullavan and James Stewart. It is an odd romance that may feel quite familiar to viewers even if they've not seen it. For this basic plot is found in both In the Good Old Summertime (1949) starring Judy Garland and Van Johnson, and You've Got Mail (1998) starring Meg Ryan and Tom Hanks. I prefer Shop Around the Corner. The film is set in Budapest in a little gift shop. Two clerks fight together all the time not aware that they are each others pen pals. Alfred Kralik discovers the truth first, and that's when things get interesting! There are some lovely scenes in this one. There is contrast in this film, as this young couple is falling in love, viewers see the break down of another relationship solely through the eyes of the husband who has just learned of his wife's infidelity. His crushed spirit and loneliness adds darkness and depth to the film. The film is in many ways about the human need to connect with others, to find friendship, love, family, a place to be loved and accepted. There are so many wonderful scenes in this one. I enjoyed all the connections between the characters. The dialogue was GREAT.

I liked The Shop Around the Corner. I first became aware of it because of You've Got Mail.

I am going to be watching Christmas in Connecticut this Christmas. I started watching it online and now I've got the DVD on order from the library. Hopefully it will get here soon! It sounds like a fun movie.